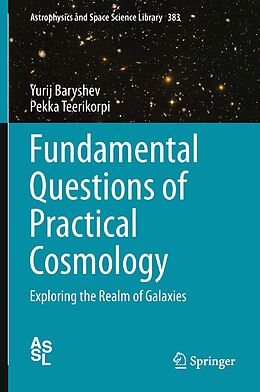 This book guides readers (astronomers, physicists, and university students) through central questions of Practical Cosmology, a term used by the late Allan Sandage to denote the modern scientific endeavor to find the cosmological model best describing the universe of galaxies, its geometry, size, age, and matter composition. The authors draw on their personal experience in astrophysics and cosmology to explain key concepts of cosmology, both observational and theoretical, and to highlight several items which give cosmology its special character. These highlighted items are: Ideosyncratic features of the "cosmic laboratory", Malmquist bias in the determination of cosmic distances, Theory of gravitation as a cornerstone of cosmological models, Crucial tests for checking the reality of space expansion, Methods of analyzing the structures of the universe as mapped by galaxies, Usefulness of fractals as a model to describe the large-scale structure and new cosmological physics inherent in the Friedmann world model.

Dr. Yurij Baryshev (b. 1948) works as Senior Research Associate at the Astronomical Institute of St.Petersburg University, Russia. He has done research in various fields of extragalactic astronomy and cosmology, where his main research interest is relativistic astrophysics including cosmology and gravity physics. He has investigated Einstein's and Feynman's approaches to gravitation, active galactic nuclei, quasars, gravitational radiation, gravitational lensing by dark matter, and crucial cosmological tests. He has also studied the implications for cosmology of the recent discovery of the dark energy component and the fractal structure of the luminous matter distribution. He has been working as invited professor at the Rome University La Sapienza (Italy) and at the Lyon University (France). He has co-authored with P. Teerikorpi the book on the history of the Cosmological Principle Discovery of Cosmic Fractals (World Scientific 2002).

Dr. Pekka Teerikorpi (b.1948) works as Senior Research Associate at Tuorla Observatory of the Department of Physics and Astronomy of Turku University. He has done research in various fields of Galactic and extragalactic astronomy and practical cosmology, with special interest in the selection effects and biases influencing the determination of the cosmic distance scale and the value of the Hubble constant. He has also made excursions to the Milky Way (the rotation curve, interstellar dust), the realm of active galactic nuclei and the problem of the local detection of dark energy. He has co-authored with Yu. Baryshev the book on the history of the Cosmological Principle Discovery of Cosmic Fractals (World Scientific 2002) and has recently written, together with a few other astronomers and exobiologists the book The Evolving Universe and the Origin of Life The Search for our Cosmic Roots (Springer 2009), telling about the history and spirit of our science.

Untertitel
Exploring the Realm of Galaxies