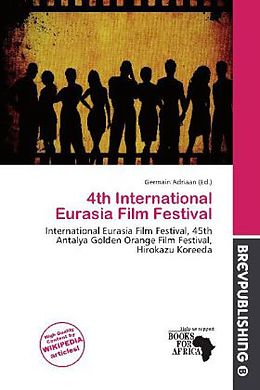 Please note that the content of this book primarily consists of articles available from Wikipedia or other free sources online. The 4th International Eurasia Film Festival was a film festival held in Antalya, Turkey from October 10 to 19, 2008. This fourth and final edition of the International Eurasia Film Festival was jointly organised by the Turkish Foundation of Cinema and Audio-visual Culture (TURSAK) and the Antalya Foundation for Culture and Arts (AKSAV) in conjunction with the 45th Antalya Golden Orange Film Festival.