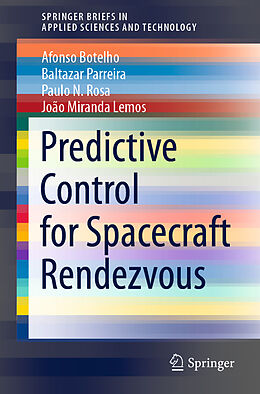 Predictive Control for Spacecraft Rendezvous is accessible to academics and students new to the topics of orbital rendezvous and model predictive control, but also presents compelling subject matter for researchers and professionals in the aerospace industry.

Afonso Botelho completed his master degree in electrical and computer engineering in 2019 at the Instituto Superior Técnico, University of Lisbon. His thesis was on Predictive Control for Spacecraft Rendezvous, for which he received the Luís Vidigal award, a prestigious prize for the best master thesis of IST on electrical engineering, computer science, or affine courses. Since then, he has been working as a stagiary engineer in the Elecnor group at DEIMOS Space.

Baltazar Parreira obtained his Licenciatura (5-year) degree in Aerospace Engineering - Avionics branch from Instituto Superior Técnico in 2001. He was a trainee at ESA-ESTEC and started working on the topic of spacecraft rendezvous in LusoSpace in 2004. Since 2006, he has been working in DEIMOS on autonomous spacecraft systems, with a high focus on rendezvous for scientific and active debris removal missions. Among others, he participated in VBRNAV, GNCO and GNCOMAT projects for ESA, and is currently working on the Rendezvous Experiment to be flown in the PROBA-3 mission. Currently, he is a Project Manager in the Flight Systems Business Unit of DEIMOS.

Dr Paulo Rosa received his 5-year degree and Ph.D. degree in electrical and computer engineering from Instituto Superior Técnico, in 2006 and 2011 respectively. He was a post-doc researcher at Institute for Systems and Robotics (ISR), and a visiting scholar at the Georgia Institute of Technology and at the University of Minnesota. He was a Fault-Detection Specialist at EDP, Lisbon, and is currently the Head of the GNC/AOCS Competence Center of Elecnor DEIMOS. His current research interests include robust adaptive control of LPV systems, guidance and control of autonomous vehicles - including spacecraft and launch vehicles -, fault detection and isolation methods, fault tolerant control, autonomous rendezvous of spacecraft, and set-valued estimation and control methods

Professor João M. Lemos is a full professor of the Department of Electrical and Computer Engineering of Instituto Superior Técnico, where he currently develops research and teaching activity in the scientific area of Systems, Decision and Control. His areas of activity comprise mainly control applications of adaptive, predictive and optimal control. He has authored 3 books, and has published more than 200 scientific papers in peer-reviewed international journals and conference proceedings. He has supervised 15 Ph. D. thesis and more than 50 master dissertations, that cover problems of his speciality. Among the research projects in which he has been involved, either as coordinator or researcher, there are several that concern control applications to solar thermal fields, biomedical problems, as well as distributed optimal control for cyber-physical systems.