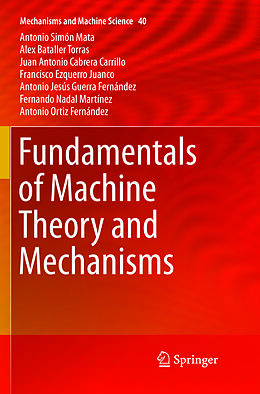 Fundamentals of Machine Theory and Mechanisms

This book develops the basic content for an introductory course in Mechanism and Machine Theory. The text is clear and simple, supported by more than 350 figures. More than 60 solved exercises have been included to mark the translation of this book from Spanish into English. Topics treated include:
dynamic analysis of machines; introduction to vibratory behavior; rotor and piston balanced; critical speed for shafts; gears and train gears; synthesis for planar mechanisms; and kinematic and dynamic analysis for robots. The chapters in relation to kinematics and dynamics for planar mechanisms can be studied with the help of WinMecc software, which allows the reader to study in an easy and intuitive way, but exhaustive at the same time. This computer program analyzes planar mechanisms of one-degree of freedom and whatever number of links. The program allows users to build a complex mechanism. They can modify any input data in real time changing values in a numeric way or using the computer mouse to manipulate links and vectors while mechanism is moving and showing the results. This powerful tool does not only show the results in a numeric way by means of tables and diagrams but also in a visual way with scalable vectors and curves.

This book covers the basic contents for an introductory course in Mechanism and Machine Theory. The topics dealt with are: kinematic and dynamic analysis of machines, introduction to vibratory behaviour, rotor and piston balance, kinematics of gears, ordinary and planetary gear trains and synthesis of planar mechanisms. A new approach to dimensional synthesis of mechanisms based on turning functions has been added for closed and open path generation using an optimization method based on evolutionary algorithms. The text, developed by a group of experts in kinematics and dynamics of mechanisms at the University of Málaga, Spain, is clear and is supported by more than 350 images. More than 60 outlined and explained problems have been included to clarify the theoretical concepts.