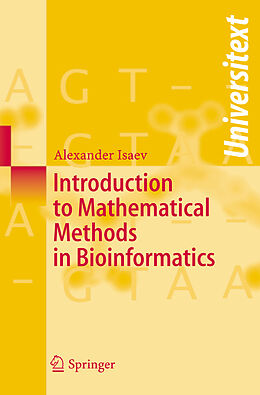 Introduction to Mathematical Methods in Bioinformatics

This book looks at the mathematical foundations of the models currently in use. This is crucial for the correct interpretation of the outputs of the models. A bioinformatician should be able not only to use software packages, but also to know the mathematics behind these packages.From this point of view, mathematics departments throughout the world have a major role to play in bioinformatics education by teaching courses on the mathematical foundations of the subject. Based on the courses taught by the author the book combines several topics in biological sequence analysis with mathematical and statistical material required for such analysis.

"The book has two parts corresponding to two courses. The first part is 'Sequence Analysis' . The second part is 'Mathematical Background for Sequence Analysis' . The book concentrates on the mathematical basics of bioinformatics . It is a comprehensive guide to bioinformatics, which takes into account that a bioinformatician should be able not only to use software packages, but also to know the mathematics behind these packages." (T. Postelnicu, Zentralblatt MATH, Vol. 1053, 2005)

"In Introduction to Mathematical Methods in Bioinformatics, Alexander Isaev describes the mathematical foundations of bioinformatics . The book succeeds in describing the fundamental mathematics behind computational sequence analysis, and in giving a taste of typical applied bioinformatics. The number of examples presented in the book is excellent . is a strong description of the theory behind the standard methods of computational sequence analysis. The book serves as a springboard for considering current bioinformatics research problems ." (Michael W. Deem, Physics Today, October, 2005)

"Introduction to Mathematical Methods in Bioinformatics introduces several basic topics in biological sequence analysis . This book is an excellent textbook for students majoring in biology, computer science, and, especially mathematics . presents a clear and mathematically rigorous exposition of procedures, algorithms, and models commonly used in analyzing biological sequences . a splendid textbook for students with some mathematical background. It is quite mathematical in its logical approach and rigorous presentation, fulfilling the author's aim ." (Yi Huang, Journal of Applied Statistics, Vol. 32 (4), 2005)

"The book's first half, cover sequence alignment, hidden Markov models, protein folding, and phylogenetic reconstruction. The second half provides necessary grounding in probability and statistics for full appreciation of the first . Summing Up: Recommended. Upper-division undergraduates and up." (D.V. Feldman, CHOICE, Vol. 42 (8), April, 2005)

"This book grew out of two lecture courses which were given by the author . The first half deals with some important topics in bioinformatics. The exposition is mathematical in character, and it is an appropriate book for a course in bioinformatics . contains many useful aspects, including good detailed explanations that let mathematicians get to the bottom of important bioinformatic methods . The second part of the book is essentially a course in probability theory . this book does a really good job." (Mark Broom, Journal of the Royal Statistical Society, Vol. 168 (2), 2005)

"The book combines several topics in biological sequence analysis with mathematical and statistical material required for such analysis. The book has two parts corresponding to two courses. The first course is for second year-students . It concerns four important topics in bioinformatics and covers them in considerable detail. The second course (intended for third-year students) includes elements of probability . The path taken in these chapters is to give the reader all the main constructions to illustrate them by many examples." (Zentralblatt für Didaktik der Mathematik, November, 2004)

Alexander Isaev is a senior lecturer in mathematics at The Australian National University, Canberra. His mathematical background is the area of several complex variables. After completing a PhD degree in 1990 at the Moscow State University, he taught at the University of Illinois (Urbana-Champaign) and at Chalmers University of Technology, Göteborg, Sweden. One is his current interests is in applying mathematics to biology.