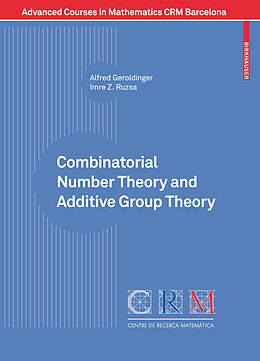 This book begins with two seminars: Additive Cominatorics and non-unique factorizations; Sumsets and structure. The book then offers notes from those seminars to address the methods, techniques and problems of contemporary additive combinatorics.

Additive combinatorics is a relatively recent term coined to comprehend the developments of the more classical additive number theory, mainly focussed on problems related to the addition of integers. Some classical problems like the Waring problem on the sum of k-th powers or the Goldbach conjecture are genuine examples of the original questions addressed in the area. One of the features of contemporary additive combinatorics is the interplay of a great variety of mathematical techniques, including combinatorics, harmonic analysis, convex geometry, graph theory, probability theory, algebraic geometry or ergodic theory. This book gathers the contributions of many of the leading researchers in the area and is divided into three parts. The two first parts correspond to the material of the main courses delivered, Additive combinatorics and non-unique factorizations , by Alfred Geroldinger, and Sumsets and structure , by Imre Z. Ruzsa. The third part collects the notes of most of the seminars which accompanied the main courses, and which cover a reasonably large part of the methods, techniques and problems of contemporary additive combinatorics.

Combinatorial number theory revolves in some sense around Goldbach's conjecture, which serves as a prototype of the kind of problems involved. On the whole, the book is quite technical and aimed principally to researchers or PhD students. The prerequisites are a good acquaintance with general commutative algebra, algebraic number theory and elementary group theory. (Fabio Mainardi, The Mathematical Association of America, October, 2009)

This book collects the material delivered in the 2008 edition of the DocCourse in Combinatorics and Geometry which was devoted to the topic of additive combinatorics. The first two parts, which form the bulk of the volume, contain the two main advanced courses, Additive Group Theory and Non-Unique Factorizations by Alfred Geroldinger, and Sumsets and Structure by Imre Z. Ruzsa.

The first part centers on the interaction between non-unique factorization theory and additive group theory. The main objective of factorization theory is a systematic treatment of phenomena related to the non-uniqueness of factorizations in monoids and domains. This part introduces basic concepts of factorization theory such as sets of lengths, and outlines the translation of arithmetical questions in Krull monoids into combinatorial questions on zero-sum sequences over the class group. Using methods from additive group theory such as the theorems of Kneser and of Kemperman-Scherk, classical zero-sum constants are studied, including the Davenport constant and the Erdös-Ginzburg-Ziv constant. Finally these results are applied again to the starting arithmetical problems.

The second part is a course on the basics of combinatorial number theory (or additive combinatorics): cardinality inequalities (Plünnecke's graph theoretical method), Freiman's theorem on the structure of sets with a small sumset, inequalities for the Schnirelmann and asymptotic density of sumsets, analogous results for the measure of sumsets of reals, the connection with the Bohr topology.