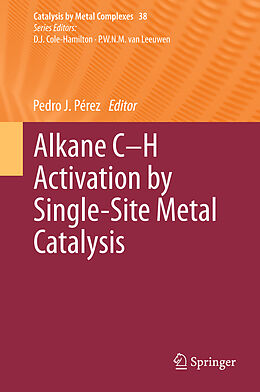 Over the past decade, much research effort has been devoted to the design and synthesis of new reagents and catalysts that can influence carbon-hydrogen bond activation, mainly because of the prospect that CH activation could enable the conversion of cheap and abundant alkanes into valuable functionalized organic compounds.

Alkane C-H Activation by Single-Site Metal Catalysis presents the current state-of-the-art development in the catalytic systems for the catalytic trans-formations of alkanes under homogeneous conditions. Chapter 1 offers a comprehensive summary of the main discoveries realized so far. Chapter 2 reviews the so-called electrophilic activation, initiated by Shulpín in the late 60s, and the base for the Catalytica system. Chapter 3 examines the catalytic borylation of alkanes, discovered by Hartwig, whereas chapter 4 provides an updated vision of the alkane dehydrogenation reaction. Chapter 5 covers the oxygenation of C-H bonds, a field of enormous interest with bioinorganic im-plications, and finally chapter 6 presents the functionalization of alkane C-H bonds by carbene or nitrene insertion.

The history of C-H bond activation, and the current research described in this book, highlight the current research and present the reader with an outlook of this field which continues to be explored by an increasingly visionary and enthusiastic group of organic, organometallic, biological and physical chemists.