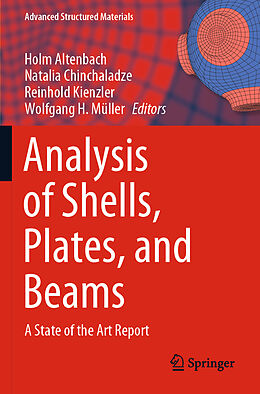 Analysis of Shells, Plates, and Beams

This book commemorates the 75th birthday of Prof. George Jaiani Georgia's leading expert on shell theory. He is also well known outside Georgia for his individual approach to shell theory research and as an organizer of meetings, conferences and schools in the field. The collection of papers presented includes articles by scientists from various countries discussing the state of the art and new trends in the theory of shells, plates, and beams.

Prof. Dr.-Ing. habil. Dr. h. c. mult Holm Altenbach is a member of the International Association of Applied Mathematics and Mechanics (GAMM), a Foreign Member of the Russian Academy of Sciences; and the International Research Center on Mathematics and Mechanics of Complex Systems (M&MoCS), Italy. He has held positions at the Otto von Guericke University Magdeburg and at the Martin Luther University of Halle-Wittenberg, both in Germany. He graduated from Leningrad Polytechnic Institute in 1985 (diploma in Dynamics and Strength of Machines). He defended his Ph.D. in 1983 and was awarded his Doctor of Technical Sciences in 1987, both at the same institute. He is currently a Full Professor of Engineering Mechanics at the Otto von Guericke University Magdeburg, Faculty of Mechanical Engineering, Institute of Mechanics (since 2011), and has been acting as the Director of the Institute of Mechanics since 2015. His areas of scientific interests are general theory of elastic and inelastic plates and shells, creep and damage mechanics, strength theories, and nano- and micromechanics. He is the Author/Co-Author/Editor of 60 books (textbooks/monographs/proceedings), approximately 380 scientific papers (among them 250 peer-reviewed), and 500 scientific lectures. He is Managing Editor (2004 to 2014) and Editor-in-Chief (2005-to date) of the Journal of Applied Mathematics and Mechanics (ZAMM) - the oldest journal in Mechanics in Germany (founded by Richard von Mises in 1921). He has been Advisory Editor of the journal "Continuum Mechanics and Thermodynamics" since 2011, Associate Editor of the journal "Mechanics of Composites" (Riga) since 2014, and Co-Editor of the Springer Series "Advanced Structured Materials" since 2010. He was awarded the 1992 Krupp Award (Alexander von Humboldt Foundation); 2000 Best Paper of the Year-Journal of Strain Analysis for Engineering Design; 2003 Gold Medal of the Faculty of Mechanical Engineering, Politechnika Lubelska, Lublin, Poland; 2004 Semko Medal of the National Technical University Kharkov, Ukraine; 2007 Doctor Honoris Causa, National Technical University Kharkov, Ukraine; 2011 Fellow of the Japanese Society for the Promotion of Science; 2014 Doctor Honoris Causa, University Constanta, Romania; 2016 Doctor Honoris Causa, Vekua Institute, Tbilisi, Georgia; 2018 Alexander von Humboldt Award (Poland).

Prof. Dr.-Ing.habil. Dr.h.c. Reinhold Kienzler went to the Technische Hochschule Darmstadt from 1970 to 1976 in order to study civil engineering and obtained his doctoral degree from the Department of Mechanics in 1980. After his dissertation, Reinhold went to Stanford University from 1981 to 1983 as a postdoc with Prof. George Herrmann from the Department of Applied Mechanics. Moreover, from 1983 to 1991, he worked as an engineer at the Fraunhofer Institut für Werkstoffmechanik in Freiburg/Breisgau. These activities sparked his interest in the fundamentals of fracture mechanics and in damage theory of materials and his habilitation was prepared with the focus on these topics. In 1991, he was appointed as a professor of Applied Mechanics at the University of Bremen, where he stayed until his retirement in 2017. He is the author to more than 130 papers in peer-reviewed journals and eight books including four textbooks on Engineering Mechanics. Since 2004 (until 2019), he was the Editor-in-Chief of the journal Archive of Applied Mechanics-one of the oldest German journals in the field of mechanics. For many years, he was (co)-organizer of the workshop series Mechanics of Materials at the Mathematisches Forschungsinstitut Oberwolfach, the German-Greek-Polish Symposium on Recent Advances in Mechanics, and the International Symposium on Defect and Material Mechanics. In 2002, he was Co-Chair of the EUROMECH Colloquium 444 "Critical Review of the Theories of Plates and Shells and New Applications." He was awarded the Berninghausen-Preis for excellence in teaching at the University of Bremen in 1996. He became an Honorary Member of the Polish Society of Theoretical and Applied Mechanics in 2011 and of the Hellenic Society of Theoretical and Applied Mechanics in 2013. He received a Distinguished Visiting Fellowship Award of the Royal Academy of Engineering, London, in 2013. In 2016, he was awarded an Honorary Doctor by the Ilia Vekua Institute of Applied Mathematics in Tbilisi, Georgia, for his engagement in the promotion of Georgian-German advancement in the sciences.

Prof. Dr. rer. nat. Wolfgang H. Müller is a member of the International Association of Applied Mathematics and Mechanics (GAMM), the American Society of Mechanical Engineers (ASME), and the American Society for the Testing of Materials (ASTM). He held/holds professorial positions at the University of Paderborn, Germany, Heriot-Watt-University, Edinburgh, UK; and at the Technische Universität Berlin, Germany. He obtained his Diploma in Physics in 1982 and his doctoral degree in Physical Engineering Science in 1986 both at the Technische Universität Berlin, Germany. In 1998 he was habilitated and obtained the venia legend for Engineering Mechanics at the University of Paderborn, Germany. Currently he is Full Professor and Chair of Continuum Mechanics and Constitutive Theory at the Institute of Mechanics of the Technische Universität Berlin. He has been acting initially as the Director and now as the Deputy Director of the Institute of Mechanics in Berlin for far more than 10 years. His areas of scientific interests are continuum physics, constitutive theory, and experimental mechanics, mostly in the field of micro- and nanotechnology. He is the Author/Co-Author/Editor of more than 15 books (textbooks/monographs/proceedings), and of far more than 250 peer-reviewed scientific papers.

This book commemorates the 75th birthday of Prof. George Jaiani - Georgia's leading expert on shell theory. He is also well known outside Georgia for his individual approach to shell theory research and as an organizer of meetings, conferences and schools in the field. The collection of papers presented includes articles by scientists from various countries discussing the state of the art and new trends in the theory of shells, plates, and beams.
Chapter 20 is available open access under a Creative Commons Attribution 4.0 International License via link.springer.com.

Untertitel
A State of the Art Report 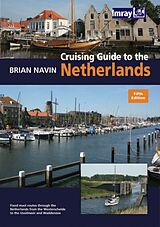