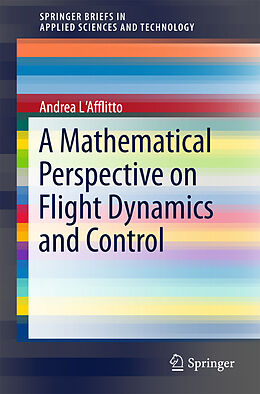 A Mathematical Perspective on Flight Dynamics and Control

This brief presents several aspects of flight dynamics, which are usually omitted or briefly mentioned in textbooks, in a concise, self-contained, and rigorous manner. The kinematic and dynamic equations of an aircraft are derived starting from the notion of the derivative of a vector and then thoroughly analysed, interpreting their deep meaning from a mathematical standpoint and without relying on physical intuition. Moreover, some classic and advanced control design techniques are presented and illustrated with meaningful examples.

Distinguishing features that characterize this brief include a definition of angular velocity, which leaves no room for ambiguities, an improvement on traditional definitions based on infinitesimal variations. Quaternion algebra, Euler parameters, and their role in capturing the dynamics of an aircraft are discussed in great detail. After having analyzed the longitudinal- and lateral-directional modes of an aircraft, the linear-quadratic regulator, the linear-quadratic Gaussian regulator, a state-feedback H-infinity optimal control scheme, and model reference adaptive control law are applied to aircraft control problems. To complete the brief, an appendix provides a compendium of the mathematical tools needed to comprehend the material presented in this brief and presents several advanced topics, such as the notion of semistability, the SmithMcMillan form of a transfer function, and the differentiation of complex functions: advanced control-theoretic ideas helpful in the analysis presented in the body of the brief.

A Mathematical Perspective on Flight Dynamics and Control will give researchers and graduate students in aerospace control an alternative, mathematically rigorous means of approaching their subject.

Autorentext
The author is an assistant professor at the School of Aerospace and Mechanical Engineering of The University of Oklahoma and is presently teaching a graduate course in flight control. Dr. L'Afflitto holds a B.S., M.S., and Ph.D. degree in aerospace engineering and a M.S. degree in Mathematics and his research is currently focused on optimal control theory and differential games theory with applications to aerospace control problems, such as fuel-optimal path planning and formation flying.

Titel
A Mathematical Perspective on Flight Dynamics and Control