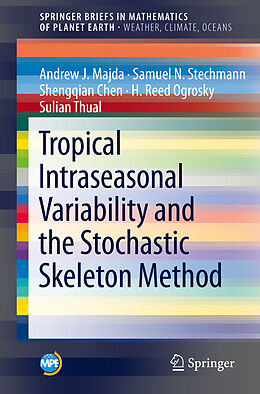 In this text, modern applied mathematics and physical insight are used to construct the simplest and first nonlinear dynamical model for the Madden-Julian oscillation (MJO), i.e. the stochastic skeleton model. This model captures the fundamental features of the MJO and offers a theoretical prediction of its structure, leading to new detailed methods to identify it in observational data. The text contributes to understanding and predicting intraseasonal variability, which remains a challenging task in contemporary climate, atmospheric, and oceanic science. In the tropics, the Madden-Julian oscillation (MJO) is the dominant component of intraseasonal variability.

One of the strengths of this text is demonstrating how a blend of modern applied mathematical tools, including linear and nonlinear partial differential equations (PDEs), simple stochastic modeling, and numerical algorithms, have been used in conjunction with physical insight to create the model. These tools are also applied in developing several extensions of the model in order to capture additional features of the MJO, including its refined vertical structure and its interactions with the extratropics.

This book is of interest to graduate students, postdocs, and senior researchers in pure and applied mathematics, physics, engineering, and climate, atmospheric, and oceanic science interested in turbulent dynamical systems as well as other complex systems.


Contributes to understanding and predicting intraseasonal variability, especially in the tropics

Presents the stochastic skeleton model that offers a theoretical prediction of the MJO's structure, leading to new detailed methods to identify it in observational data

Authors are leading experts in applied mathematics and atmosphere, climate, and ocean science