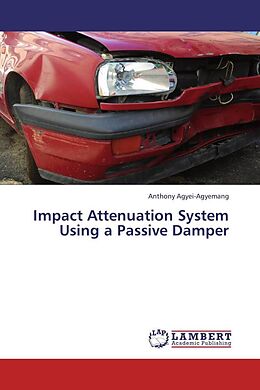 A mathematical model for a bumper was developed and used to simulate road vehicle impact. A passive friction element was introduced into the bumper system to improve its impact attenuation and kinetic energy absorption capacity. The mathematical model of the bumper-damper system was used to simulate impact phenomena for a 1900 kg mass moving at a speed of 70 km/h (19.4 m/s), 17.5 times the speed of a typical design specification. The simulation revealed that the energy absorption capacity of the bumper was improved with the addition of a friction element. Simple experiments performed confirmed that higher energy absorption could be achieved with the addition of a friction element to traditional bumpers. It was observed that the addition of the friction element to a traditional bumper of a vehicle could increase the critical design speed from 4 km/h (1.11 m/s) to 14.9 km/h (4.1 m/s). That is, a passive friction damper system could be used to attenuate road vehicle impact energy in collisions (of vehicles of mass similar to that of a typical saloon car) at speeds 3 times higher than the speed for which current conventional bumpers are designed to attenuate (i.e. 4 km/h).