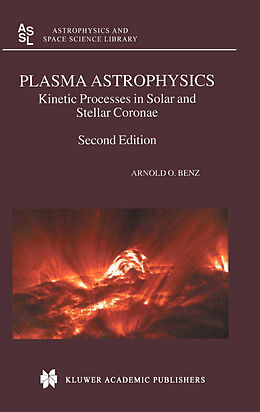 This textbook is intended as an introduction to the physics of solar and stellar coronae, emphasizing kinetic plasma processes. It is addressed to observational astronomers, graduate students, and advanced undergraduates without a ba- ground in plasma physics. Coronal physics is today a vast field with many different aims and goals. So- ing out the really important aspects of an observed phenomenon and using the physics best suited for the case is a formidable problem. There are already several excellent books, oriented toward the interests of astrophysicists, that deal with the magnetohydrodynamics of stellar atmospheres, radiation transport, and radiation theory. In kinetic processes, the different particle velocities play an important role. This is the case when particle collisions can be neglected, for example in very brief phenomena such as one period of a high-frequency wave or in effects produced by energetic particles with very long collision times. Some of the most persistent problems of solar physics, like coronal heating, shock waves, flare energy release, and particle acceleration, are likely to be at least partially related to such p- cesses. Study of the Sun is not regarded here as an end in itself, but as the source of information for more general stellar applications. Our understanding of stellar processes relies heavily, in turn, on our understanding of solar processes. Thus an introduction to what is happening in hot, dilute coronae necessarily starts with the plasma physics of our nearest star.

This thoroughly revised textbook is a basic introduction to plasma phenomena in solar and stellar coronae emphasizing non-MHD aspects. The natural way in which the author unifies observations and theory gives a wide perspective to the subject. An important feature is the lucidly written presentation of the fundamentals of plasma physics. The basic theory thus developed is then extended to some exemplary and important observations of coronal dynamics, such as coronal currents, particle acceleration, propagation of particle beams, and shocks.

The book has grown from teaching introductory courses on plasma astrophysics at the Swiss Federal Institute of Technology (ETH). It addresses advanced undergraduates and first-year graduate students without a background in plasma physics. It will also be of interest to more senior research workers involved in coronal physics of the Sun and other stars, solar/stellar winds, and various other fields of plasma astrophysics.