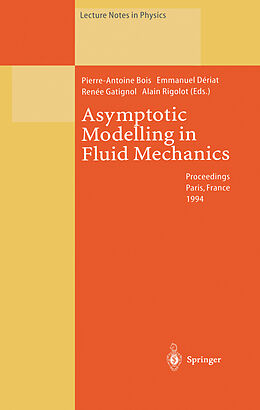 The purpose of this book is to gather contributions from scientists in fluid mechanics who use asymptotic methods to cope with difficult problems. The selected topics are as follows: vorticity and turbulence, hydrodynamic instability, non-linear waves, aerodynamics and rarefied gas flows. The last chapter of the book broadens the perspective with an overview of other issues pertaining to asymptotics, presented in a didactic way.

Zusammenfassung
"..the presentation is excellent, the figures and diagrams are clear, and the price is affordable. However theoretical and specialized, this book may be of interest to researchers and to master Ph.D. students in mechanical fields." - Physicalia

Inhalt
Growing up with asymptotics.- Instabilities and vortex patterns in circular Couette flow with axial density stratification.- Vortices subjected to non-axisymmetric strain unsteady asymptotic evolution.- Some contributions to asymptotic theory for turbulent shear flows.- Turbulent entrance flow in a channel: An asymptotic approach.- An efficient wave interaction mechanism within a turbulent boundary layer.- Bifurcations of capillary-gravity interfacial waves.- The effect of a low-frequency modulation on some codimension 2 bifurcations.- Finite amplitude waves in a boundary layer flow over compliant walls.- Recent developments in the theory of the non-linear stability of high Reynolds number flows.- Weakly non linear instability of the laminar boundary layer calculated by a parabolic system of equations.- Applying a condition of observability to constitutive equations of laminar motion.- Hysteresis and interaction of standing waves with Faraday excitation.- About the radiation diagram of an underwater acoustic source in the presence of gravity waves.- Finite-amplitude, pulsed, ultrasonic beams.- Long-waves on thin viscous liquid film derivation of model equations.- On global existence theorems for the initial-boundary value problem for the Boltzmann equation.- Diffusion approximation and Arnold's Cat Map.- Second order analysis of the inner shock structure.- Transient behaviour of a gaseous cavity attached to a projectile in a two phase flow.- From the analytical theory to hypersonic aircraft design.- Upstream influence in mixed convection at small Richardson number on triple, double and single deck scales.- Asymptotic modelling for separating boundary layers.- Going on with asymptotics.