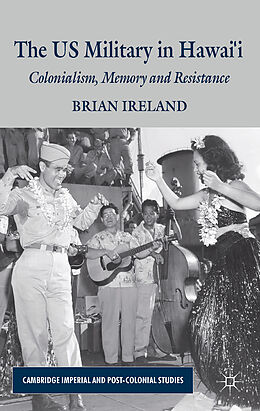 The US Military in Hawai'i

An examination of how the US military in Hawaii is depicted by museum curators, memorial builders, film makers, and newspaper reporters. These mediums convey information, and engage their audiences, in ways that, together, form a powerful advocacy for the benefits of militarism in the islands.

'Ireland's focus, as his subtitle indicates, is on the practices of remembering and forgetting that have both contributed and eroded military's presence in Hawai'i. In pursuit of the data needed to support his project, Ireland has been persistent and creative: he has both unearthed new data and interpreted familiar representations in unfamiliar ways.'

'The US Military in Hawai'i is an engaging and passionately written study that should interest scholars in numerous fields.'

'People who are unfamiliar with historic debates in the Pacific region might find this book an eye-opener, [...] the book is well above the bar in terms of readability, and the author is a solid and effective researcher...'

- Douglas A. Borer, The Journal of Pacific History

Titel
The US Military in Hawai'i