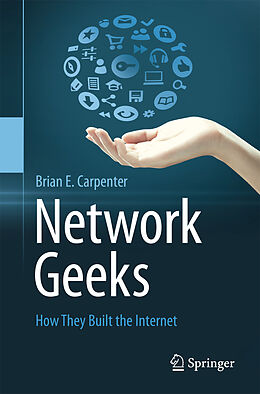 Part history, part memoir and part cultural study, this book offers an inside look at the creation of the Internet and the establishment of the Internet Engineering Task Force, from the perspective of a self-proclaimed geek who witnessed it first-hand.

The impact on modern society made by the Internet is immeasurable. Yet some questioned why anyone would want such a thing when the idea was first introduced.

Part history, part memoir and part cultural study, Network Geeks charts the creation of the Internet and the establishment of the Internet Engineering Task Force, from the viewpoint of a self-proclaimed geek who witnessed these developments first-hand. With boundless enthusiasm and abundant humour, Brian Carpenter leads the reader on a journey from post-war Britain to post-millennium New Zealand, describing how the Internet grew into today's ubiquitous, global network, including the genesis of the World-Wide Web in the hotbeds of a particle collider at CERN. Illuminating the science and technology behind the apparent magic trick of the Internet, Network Geeks opens a window into the initially bewildering world of the Internet engineering geek. After reading this book, you may wish to join this world yourself.

An entertaining and accessible account of the creation of the Internet

Autorentext
Dr. Brian Carpenter is a physicist, computer scientist, and engineer born in Leicester, England just after World War II and educated at the Universities of Cambridge and Manchester. As leader of the networking group at the CERN particle physics laboratory near Geneva, he was in at the birth of the European Internet in the late 1980s, and the World-Wide Web was invented elsewhere in the same building. He has been an active participant in the Internet Engineering Task Force for many years and chaired it in 2005-2007. He's also chaired both the Internet Architecture Board and the Internet Society. As well as CERN, he's worked for IBM, and for Massey University and the University of Auckland in New Zealand. He has numerous technical publications to his name, including more than thirty Internet Request for Comment documents.

Where Do Geeks Come From?

The Years of Miraculous Growth

Untertitel
How They Built the Internet