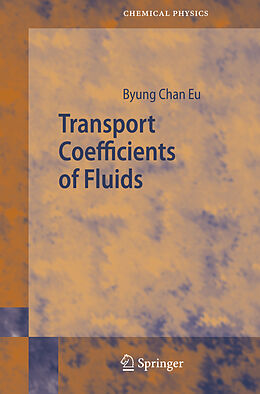 In this monograph, the density ?uctuation theory of transport coe?cients of simple and complex liquids is described together with the kinetic theory of liquids, the generic van der Waals equation of state, and the modi?ed free volume theory. The latter two theories are integral parts of the density ?- tuation theory, which enables us to calculate the density and temperature dependence of transport coe?cients of liquids from intermolecular forces. The terms nanoscience and bioscience are the catch phrases currently in fashion in science. It seems that much of the fundamentals remaining unsolved or poorly understood in the science of condensed matter has been overshadowed by the frenzy over the more glamorous disciplines of the former, shunned by novices, and are on the verge of being forgotten. The transport coe?cients of liquids and gases and related thermophysical properties of matter appear to be one such area in the science of macroscopic properties of molecular systems and statisticalmechanicsofcondensedmatter. Evennano-andbiomaterials,h- ever, cannot be fully and appropriately understood without ?rm grounding and foundations in the macroscopic and molecular theories of transport pr- ertiesandrelatedthermophysicalpropertiesofmatterinthecondensedphase. Oneisstilldealingwithsystemsmadeupofnotafewparticlesbutamultitude of them, often too many to count, to call them few-body problems that can be understoodwithoutthehelpofstatisticalmechanicsandmacroscopicphysics. In the density ?uctuation theory of transport coe?cients, the basic approach taken is quite di?erent from the approaches taken in the conventional kinetic theories of gases and liquids.

Describes a new and powerful method for calculating transport coefficients

Until recently the formal statistical mechanical approach offered no practicable method for computing the transport coefficients of liquids, and so most practitioners had to resort to empirical fitting formulas. This has now changed, as demonstrated in this innovative monograph. The author presents and applies new methods based on statistical mechanics for calculating the transport coefficients of simple and complex liquids over wide ranges of density and temperature. These molecular theories enable the transport coefficients to be calculated in terms of equilibrium thermodynamic properties, and the results are shown to account satisfactorily for experimental observations, including even the non-Newtonian behavior of fluids far from equilibrium.