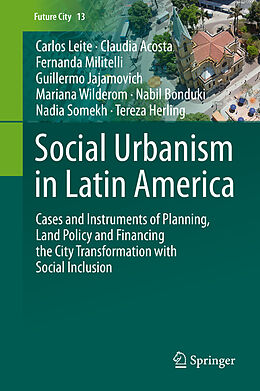 This book highlights current concepts of Social Urbanism, the contemporary set of multiple and interdisciplinary urban studies that have emerged mainly from the complex realities of Latin American cities. The discussion that follows places special emphasis on public land policy and the innovative urban instruments developed in that region to promote social and territorial inclusion.

Critical reflections throughout the pages of this book shed light into the local context of each case-study in order to understand their specific set of challenges and opportunities. Relevant lessons are extracted from the three cities here analyzed, the medium-scale city of Medellin, the large-scale city of Bogota, and the megacity of Sao Paulo, as well as from local innovative experiences in Argentina and Uruguay.

These cities underwent promising transformation processes over two decades, applying planning and financing instruments of land policy which have produced significant shifts in the urban development paradigm in the region. The quest for social inclusion has emerged as the common denominator in these cities, awakening growing interest across several fields of urban studies, from public policies and city management to urban law, city financing, urban development, and innovative community participation processes. The book brings implications on urban land policy for transition cities in the Global South.

The question of social inclusion in Global South cities is however far from being solved; the analysis presented in this book shows advances and hope, besides a long path still ahead, which can only be faced through a continuous and challenging incremental process. May this book be an incremental step.

Presents cases from public policies, plans, projects and actions in an interdisciplinary approach with regard to urban development and urban law

Carlos Leite, Urbanist, PhD (University of Sao Paulo) is Full Professor at the School of  Architecture and Urbanism, Mackenzie Presbyterian University; Visiting Researcher at the Global Cities Program and Member of the Research Group on Urban Space and Health, both at the Institute of Advanced Studies, University of Sao Paulo; Assistant Professor at PPG-CIS Uninove and Director of Stuchi & Leite Projetos e Consultoria em Desenvolvimento Urbano. He was visiting scholar at Polytechnic University of California (CalPoly) and College of Environmental Design, UC Berkeley. He was Director of Sao Paulo Urbanism public company, Sao Paulo City Hall. He is a consultant at international multilateral institutions and coordinates the research group on Innovative Urban Instruments, Land Policy and Social Urbanism.

Claudia Acosta is an Urban Law and land policy specialist. She has a Masters degree in Urban Studies (El Colegio de México) and in Law and Development (Fundacao Getulio Vargas); is specialist on Land Policy for Latin America (Lincoln Institute of Land Policy) and finishes her PhD studies on public management and government at Fundacao Getulio Vargas, Sao Paulo. She is consultant at UN-Habitat Latin America, Inter-American Development Bank, and at different Latin American countries on land value capture tools and land use and social housing regulations. She is Professor at Universidad del Rosario (Colombia) and the Lincoln Institute of Land Policy (Latin American program). She works in Sao Paulo and Colombia.

Fernanda Miltelli is graduate, has Masters degree and currently develops her PhD studies at the School of  Architecture and Urbanism, Mackenzie Presbyterian University, Sao Paulo, Brazil. She has postgraduate studies on Environmental Development,  Polytechnic School of the University of Sao Paulo, 2011; Urban Law, PUC  Minas Gerais, 2012; Fundamental Themes of Land Regularization, Paulista School of Magistracy, 2011. She has ten years of experience in urban development consulting, with emphasis on Integrated Diagnostics in Socioeconomic and Environmental Impact Studies, at the North and Northeast regions of Brazil; Implementation of Resettlement Plan in Mozambique; Land  use regularization in the Housing and Urban Development Company of the State of Sao Paulo. She currently teaches urban and landscape design at Paulista University (UNIP) in graduation course of Architecture and Urbanism.

Guillermo Jajamovich s an urban studies specialist with a B.A. in Sociology, Master degree in History and Culture of Architecture and the City and a Ph.D. in Social Sciences (University of Buenos Aires). He is Adjunct Researcher at the National Council of Scientific and Technical Research - Latin American and the Caribbean Studies Institute at the University of Buenos Aires and visiting professor at Universidad Torcuato Di Tella, Universidad Nacional de General Sarmiento, Universidad de Tres de Febrero and Universidad de Buenos Aires. He was visiting researcher at the Instituto Iberoamericano de Berlín and the Universidad Nacional Autónoma de México. He has experience in urban policies consulting at the Buenos Aires city Legislature and the Laboratorio de Políticas Públicas (LPP). His research focus on large urban projects, Latin American urban studies, urban policy circulation and just cities.

Nabil Bonduki is a Full Professor at University of Sao Paulo and a Fulbright Visiting Scholar in University of California, Berkeley. In the city of Sao Paulo, he is former superintendent of low-income housing (1989-1992), former City Councilor (2001-2004 and 2013-2016) and Secretary of Culture (2015-2016). Bonduki was the rapporteur and author of the Law of Strategic Master Plan of the City of Sao Paulo in the City Councilor (2002 and 2014). He worked as the coordinator of the Brazil's National Housing Plan (2007-2008) and acted as the National Secretary of Urban Environment of the National Ministry of Environment (2011-2012). He worked in planning and housing in several others Brazilian cities. He is author of 14 books, as The Struggle for Urban Reform in Brazil (2018), Pioneers of Social Housing (2015, Jabuti Award), Urban Interventions in Historical Centers (2012) and Origins of Social Housing in Brazil (1998).

Nadia Somekh is an emeritus professor of Architecture and Urbanism at Mackenzie Presbyterian University, Sao Paulo, Brazil; she was president of CONPRESP (Sao Paulo City Heritage Council) and director of DPH (Heritage Department of Sao Paulo City; 2013-2016). She was President of EMURB (Municipal Urbanization Company (2002-2004) and Economic Development Secretary in Santo Andre City, among other public administration positions. She was Dean of the School of Architecture and Urbanism, Mackenzie Presbyterian University; Visiting Professor at the Cergy Pontoise University and at the IUP (Institut d'Urbanisme de Paris); councilor at Union of International Architects (UIA; 2008-2017). She wrote A Cidade Vertical e o Urbanismo Modernizador, among other books. Currently her research work is focused on heritage and urban projects with social inclusion in the contemporary city as well on the vertical growth of Brazilian cities.

Tereza Herling is Architect and Urbanist, graduate and PhD from Sao Paulo University's School of Architecture and Urbanism, with thesis on Sao Paulo's urban sprawl over environmental protected areas. Her professional action is mainly on public policy formulation and implementation, especially on social housing, public spaces and urban development issues. The process of policy design comprehended the preparation of plans, programs and projects and information systems' preparation. During 2013-2016, she worked as Municipal Urban Development Vice Secretary of Sao Paulo, involved in the preparation of the City Strategic Master Plan and the related urban instruments. She is urban development consultant, with recent works developed at World Bank and Cities Alliance, sharing experiences in Brazil and Latin America and Caribe; Professor at the School of Architecture and Urbanism, Mackenzie Presbyterian University and at Sao Judas University, Sao Paulo, Brazil.

PART I: Concepts and Context

Untertitel
Cases and Instruments of Planning, Land Policy and Financing the City Transformation with Social Inclusion