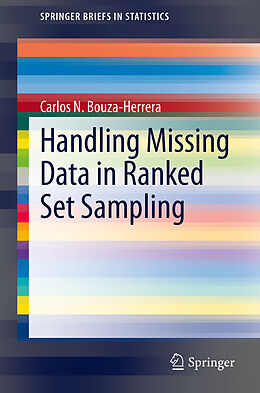 The existence of missing observations is a very important aspect to be considered in the application of survey sampling, for example. In human populations they may be caused by a refusal of some interviewees to give the true value for the variable of interest. Traditionally, simple random sampling is used to select samples. Most statistical models are supported by the use of samples selected by means of this design. In recent decades, an alternative design has started being used, which, in many cases, shows an improvement in terms of accuracy compared with traditional sampling. It is called Ranked Set Sampling (RSS). A random selection is made with the replacement of samples, which are ordered (ranked). The literature on the subject is increasing due to the potentialities of RSS for deriving more effective alternatives to well-established statistical models. In this work, the use of RSS sub-sampling for obtaining information among the non respondents and different imputation procedures are considered. RSS models are developed as counterparts of well-known simple random sampling (SRS) models. SRS and RSS models for estimating the population using missing data are presented and compared both theoretically and using numerical experiments.

Prepares the reader to develop further research on estimation with missing observations?

Autorentext
Carlos N. Bouza-Herrera was born in La Habana, Cuba on 29/x/1942. He obtained his BSc. and MSc. in mathematical statistics at the School of Mathematics of Universidad de La Habana and his PhD at the University of Belgrade, former Yugoslavia, in 1977. Since 1971 he has been teaching at the Universidad de La Habana and is currently a consultant professor (emeritus). His research interests are sampling theory, non parametric inference, robust statistics and stochastic optimization. He has also taught undergraduate and graduate courses in Colombia, France, Mexico, Spain and Venezuela. He has been invited to develop joint research by institutions in Brazil, Colombia, China, Cuba, France, India, Italy, Mexico and Spain. He is the author of more than 150 papers and 12 books and monographs published by editorials in Asia, Europe, Latin America and the United States. He is currently working as a referee for different well-known journals and is a contributing editor of Current Index to Statistics and International Abstracts of Operations Research. His wife, Sira, and daughter, Gemayqzel, also have a PhD in Mathematics. He loves jazz and plays the saxophone and pan flute. His favorite sport is jogging.