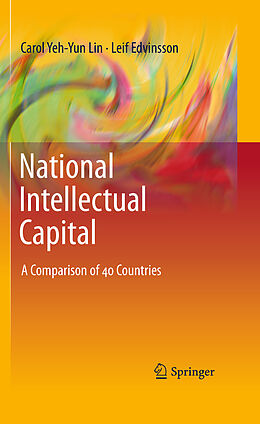 Over the past decade, knowledge assets and intellectual capital have been attracting an increasing amount of attention, not only from academics and CEOs, but also from national policy makers. To date, most studies of intellectual capital have focused at the organizational level, with an emphasis on explaining the role of intangible assets as a differentiator between accounting value and market value as a possible source of corporate competitive advantage. More recently, pioneers in the field, including the authors of this book, have begun to apply these methodologies to a broader scope, with the objective of comparing the intellectual capital indices at the national or regional level. As a result, an increasing number of world organizations and researchers are commissioned to investigate this future-oriented crucial national issue. Yet, the linkage between the value of intangible assets and how to quantify or benchmark it is still tenuous, not to mention easily misunderstood by a layman for guiding better decision making. With the belief that numbers talk and statistics hide valuable information, this book serves to present the authors' research findings, covering 14 years (1995-2008) of intellectual capital information, comprised of human capital, market capital, process capital, renewal capital, and financial capital for 40 countries. The last three chapters go beyond analysis of current intellectual capital factors, and present practical tools for launching initiatives at the national level. The book will serve as an essential resource for researchers, policy makers, and business leaders concerned with issues of economic growth and competitiveness, innovation, and business creation.

The first book of its kind, reporting intellectual capital indicators for 40 countries, over 14 years, and statistically validated

Autorentext
Dr. Carol Yeh-Yun Lin is Professor of Business Administration at National Chengchi University in Taiwan. She received her Ph.D. in Human Resource Development from the University of Texas at Austin in 1992. Dr. Lin has published extensively, with over 40 scholarly articles and 60 conference presentations on strategic human resource management, international human resource management, intellectual capital, business ethics, and corporate social responsibility. Her papers have appeared in the International Journal of Human Resource Management, Journal of Business Ethics, Long Range Planning, Health Care Management Review, Journal of Small Business Management, Journal of Psychology, and Journal of Intellectual Capital. Leif Edvinsson, Founding Partner of the consultancy, Universal Networking Intellectual Capital, is the world's leading expert on Intellectual Capital (IC). As former vice president and the world's first corporate director of Intellectual Capital at Skandia of Stockholm, Sweden, Edvinsson has been a key contributor to the theory of IC and oversaw the creation of the world's first corporate Intellectual Capital Annual Report. In 1996 he was awarded by both the American Productivity and Quality Center (US) and Business Intelligence (UK) for his pioneering work on IC. Mr. Edvinsson was formerly senior vice president for training and development of S-E Bank, and president and chairman of Consultus AB, a Stockholm-based consulting company. In light of his work in both training and Intellectual Capital, Edvinsson has been a special advisor on service trade to the Swedish Ministry of Foreign Affairs. He is also special adviser to the Swedish Cabinet on the effects of the new digital economy, special advisor to the United Nations International Trade Center and is a co-founder of the Swedish Coalition of Service Industries. Mr. Edvinsson holds an MBA from the University of California, Berkeley. He is the author or co-author of numerous publications on IC, including one of the first books on the subject, Intellectual Capital (1997), Corporate Longitude (2002), Leveraging Corporate Knowledge (2004), and Intellectual Capital for Communities (2005). He is a regular speaker before such organizations as the BBC, CIO, Conference Board, Economist, Handelsblatt, Insead, and IMD. Her serves on the Board of Directors of several knowledge-intensive enterprises, including the Swedish Brain Research Foundation and the Center for Molecular Medicine at Karolinska Institute, Stockholm. Since 2000 he has been the Honorary Chairman of the UK-based Henley College, KM Forum. Since 2000, he has been Adjunct Professor of Intellectual Capital at Lund University, and since 2007 Chair Professor at the Hong Kong Polytechnic University.

Untertitel
A Comparison of 40 Countries