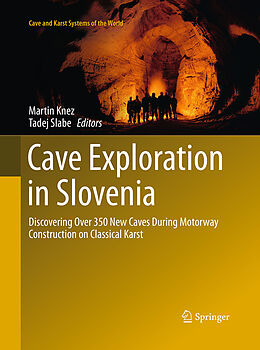 This book focuses on the opening and exploration of more than 350 previously undiscovered caves of the Slovenian Karst, discovered during motorway construction work. The summarizes the planning of traffic roads and presents the new findings obtained during construction, as well as studies on newly-discovered karst phenomena and karst waters and their protection.

Earthmoving work during construction has revealed a cross-section of the surface of the Classical Karst, covered karst with famous underground stone forests and unique karst in breccia. Research conducted in these caves has yielded a number of new findings on how the karst surface and underground were formed, on the flow of water through karst aquifers, and on the evolution of karst on various types of rock and under various conditions. The work was written by researchers from the ZRC SAZU Karst Research Institute and the Institute of Geology AS CR. The reader will benefit from the authors' collaboration with planners and builders, which offers valuable insights for the planning and execution of their own activities in karst regions.

Furthers our understanding of cave and karst systems around the world

Bridges the gap between karst research and civil engineering

Inhalt
Part I Introduction.- Karstological monitoring of the construction, research and planning of motorways over Slovenian karst.- Part II Classical Karst.- Unroofed caves central discovery on the ebulovica-Dane motorway section.- Extremely cavernous terrain between Dane and Fernetii implies the variegated formation of Slovenian Karst.- Karst features uncovered during the construction of the motorway section Divaa-Kozina.- Unroofed caves near Kozina and their identification within the karst relief.- Development and karstification of the karst aquifer, which were uncovered on the Klanec-rni Kal motorway section.- Unroofed caves give important clues about Karst development.- The great unroofed cave Brezstropa jama near Povir.- Composition and origin of clastic sediments from dolines and unroofed caves found near Divaa.- Clastic sediments from dolines on the Divaa-Kozina section and their mineral composition.- Research of cave sediments from infilled cave near Divaa.- Paleomagnetic research of unroofed cave at Kozina.- The age of cave sediments from unroofed caves opened during highway construction near Kozina (SW Slovenia), determined with paleomagnetic analyses.- Sediments in cave S647, uncovered during the Kastelec tunnel construction.- Part III Comparison with Low and Covered Karst and Karst in Breccia.- Dolenjska karst uncovered on the Bi-Korenitka motorway section.- Subsoil stone forests and other karst phenomena on the HrastjeLenica motorway section.- Stone forest near Trebnje.- Karst features on the Vipava-Selo motorway section.- Karst in the breccia of Rebernice in the Vipava valley.- Part IV Planning of Motorway Construction on Karst.- Karstological research for the preliminary design of the motorway section Bi-Hrastje, subsection Ponikve-Hrastje, Sv. Ana variant.- Planning of motorway in Pivka and Reka rivers catchment areas.- Part V Construction and Use of Motorways with Regard to Karst Waters, Georadar Research and Subterranean Biology.- Transport of non-aqueous phase liquids in karst.- Impact of traffic on karst waters.- Georadar research at motorway collapse near Postojna.- Impact assessment of highway construction on subterranean habitats and fauna near kocjanske jame (UNESCO heritage site).