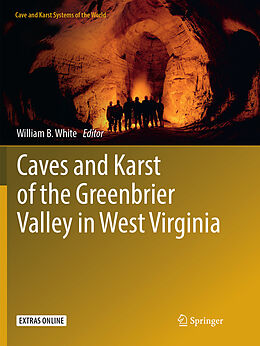 Caves and Karst of the Greenbrier Valley in West Virginia

The focus of this book is on the more than 2000 caves of the Greenbrier Valley of West Virginia of which the 14 with lengths greater than 10 km have an aggregate length of 639 km. The major caves form the core part of sub-basins which drain to big springs and ultimately to the Greenbrier River. Individual chapters of this book describe each of the major caves and its associated drainage basin. The caves are formed in the Mississippian Greenbrier Limestone in a setting of undulating gentle folds. Fractures, lineaments and confining layers within the limestone are the main controlling factors. The caves underlie an extensive sinkhole plain which may relate to a major erosion surface. The caves are habitat for both aquatic and terrestrial organisms which are cataloged and described as are the paleontological remains found in some of the caves. The sinkhole plain of the Greenbrier karst and the underlying complex of cave systems are the end result of at least a ten million year history of landscape evolution which can be traced through the evolving sequence of cave passages and which is described in this book.

Explores the aquatic fauna, terrestrial fauna, and fossil remains found in these caves

Provides a comprehensive geologic, hydrologic, and geomorphic interpretation of the evolution of the Greenbrier Karst

Titel
Caves and Karst of the Greenbrier Valley in West Virginia