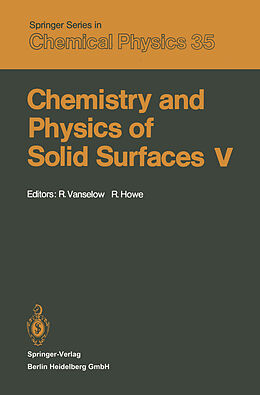 This volume contains review articles which were written by the invited speak ers of the Sixth International Summer Institute in Surface Science (ISISS), held at the University of Wisconsin-Milwaukee in August 1983. The objective of ISISS is to bring together a group of internationally recognized experts on various aspects of surface science to present tutorial review lectures over a period of one week. Each speaker is asked, in addi tion, to write a review paper on his lecture topic. The collected articles from previous Institutes have been published under the following titles: Surface Science: Recent Progress and Perspectives, Crit. Rev. Solid State Sci. 4, 124-559 (1974). Chemistry and Physics of Solid Surfaces, Vol. I (1976), Vol. II (1979), Vol. III (1982) (CRC Press, Boca Raton, FL), and Vol. IV (1982), Springer Ser. Chern. Phys. , Vol. 20 (Springer-Verlag Berlin, Heidelberg, New York 1982) No single collection of reviews (or one-week conference for that matter) can possibly cover the entire field of modern surface science, from heter ogeneous catalysis through semiconductor surface physics to metallurgy. It is intended, however, that the series Chemistry and Physics ofSolid Sur faces as a whole should provide experts and students alike with a comprehen ve set of reviews and literature references on as many aspects of the subject as possible, particular emphasis being placed on the gas-solid interface. Each volume is introduced with a historical review of the devel opment of one aspect of surface science by a distinguished participant in that development.