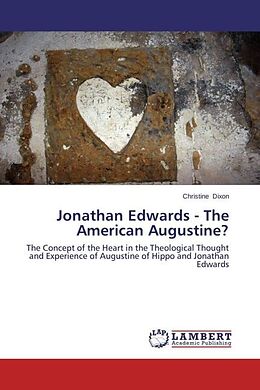 This work contributes to Edwardsean and Augustinian scholarship by examining the importance of the relationship between the heart and the Trinity in the thought and experience of two seminal Christian thinkers, Jonathan Edwards and Augustine of Hippo. Many scholars have noted similarities between the two theologians but as yet there has not been a systematic attempt to identify the basis for such judgments. The work examines the concept of the heart as understood in classical antiquity and in the eighteenth century. It then considers Edwards kinship with Augustine concerning the relationship between the Trinity and the heart from four perspectives: conversion, the nature of the Trinity, spiritual epistemology and aesthetics. Without claiming any indebtedness on Edwards part to a familiarity with Augustine s writings, it becomes apparent that Edwards recapitulates an Augustinian strain of piety that warrants his title of the American Augustine.

Dr Christine Mary Dixon (15/12/43 - 10/9/08) was born in England and emigrated to Australia at age 6. Married for 42 years and a wonderful mother to 3 daughters, Christine devoted her professional life to teaching and academic scholarship. Like those she most admired, Augustine of Hippo and Jonathan Edwards, Christine was a scholar theologian.