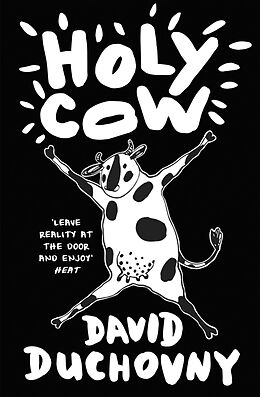 Holy Cow by David Duchovny is a comic delight that will thrill fans of Jasper Fforde and Ben Aaronovitch . And anyone who enjoys a witty wisecrack in a novel. Elsie Bovary is a cow and a pretty happy one at that. Until one night, Elsie sneaks out of the pasture and finds herself drawn to the farmhouse. Through the window, she sees the farmer's family gathered around a bright Box God - and what the Box God reveals about something called an 'industrial meat farm' shakes Elsie's understanding of her world to its core. The only solution? To escape to a better, safer world. And so a motley crew is formed: Elsie; Shalom, a grumpy pig who's recently converted to Judaism; and Tom, a suave turkey who can't fly, but can work an iPhone with his beak. Toting stolen passports and slapdash human disguises, they head for the airport ... Elsie is a wise-cracking, slyly witty narrator; Tom dispenses psychiatric advice in a fake German accent; and Shalom ends up unexpectedly uniting Israelis and Palestinians. David Duchovny's charismatic creatures point the way toward a mutual understanding and acceptance the world desperately needs.

Vorwort
A rollicking, globe-trotting adventure with a twist from the star of The X-Files and Californication featuring Elsie, an unforgettable four-legged heroine

Autorentext
David Duchovny is a television, stage and screen actor, as well as a screenwriter and director.

A rollicking, globe-trotting adventure with a twist from the star of The X-Files and Californication featuring Elsie, an unforgettable four-legged heroine.