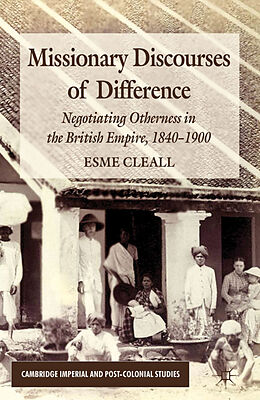 Missionary Discourse examines missionary writings from India and southern Africa to explore colonial discourses about race, religion, gender and culture. The book is organised around three themes: family, sickness and violence, which were key areas of missionary concern, and important axes around which colonial difference was forged.

Autorentext
ESME CLEALL studied at the University of Sheffield, UK, before completing a PhD at UCL. She currently teaches Modern History at the University of Liverpool. Her research is on the social and cultural history of Britain and its Empire and the intersections between 'race', 'gender' and 'disability' in colonial thought. Her new project investigates nineteenth-century understandings of deafness.


Inhalt
Acknowledgements Introduction. Difference and Discourse in the British Empire Note on Terminology PART I: FAMILIES AND HOUSEHOLDS: DIFFERENCE AND DOMESTICITY Introduction: Difference and Domesticity Representing Homes: Gender and Sexuality in Missionary Writing Re-making Homes: Ambiguous Encounters and Domestic Transgressions PART II: SICKNESS AND THE EMBODIMENT OF DIFFERENCE Introduction: Sickness and the Embodiment of Difference Pathologising Heathenism: Discourses of Sickness and the Rise of Medical Missions Illness on the Mission Station: Sickness and the Presentation of the 'Self' PART III: VIOLENCE AND DIFFERENCE Violence and the Construction of the Other Colonial Violence: Whiteness, Violence and Civilisation Conclusion