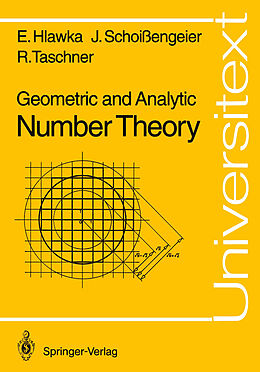 In the English edition, the chapter on the Geometry of Numbers has been enlarged to include the important findings of H. Lenstraj furthermore, tried and tested examples and exercises have been included. The translator, Prof. Charles Thomas, has solved the difficult problem of the German text into English in an admirable way. He deserves transferring our 'Unreserved praise and special thailks. Finally, we would like to express our gratitude to Springer-Verlag, for their commitment to the publication of this English edition, and for the special care taken in its production. Vienna, March 1991 E. Hlawka J. SchoiBengeier R. Taschner Preface to the German Edition We have set ourselves two aims with the present book on number theory. On the one hand for a reader who has studied elementary number theory, and who has knowledge of analytic geometry, differential and integral calculus, together with the elements of complex variable theory, we wish to introduce basic results from the areas of the geometry of numbers, diophantine ap proximation, prime number theory, and the asymptotic calculation of number theoretic functions. However on the other hand for the student who has al ready studied analytic number theory, we also present results and principles of proof, which until now have barely if at all appeared in text books.

Autorentext
Rudolf Taschner is Professor of Mathematics at the Institute for Analysis and Scientific Computing, Technical University Vienna, Austria.

Based on lectures given by Professor Hlawka, this book covers diophantine approximation, uniform distribution of numbers, geometry of numbers and analytic numbers theory.