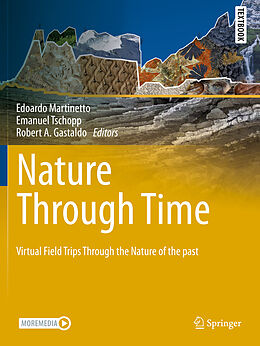 This book simulates a historical walk through nature, teaching readers about the biodiversity on Earth in various eras with a focus on past terrestrial environments. Geared towards a student audience, using simple terms and avoiding long complex explanations, the book discusses the plants and animals that lived on land, the evolution of natural systems, and how these biological systems changed over time in geological and paleontological contexts. With easy-to-understand and scientifically accurate and up-to-date information, readers will be guided through major biological events from the Earth's past.

The topics in the book represent a broad paleoenvironmental spectrum of interests and educational modules, allowing for virtual visits to rich geological times. Eras and events that are discussed include, but are not limited to, the much varied Quaternary environments, the evolution of plants and animals during the Cenozoic, the rise of angiosperms, vertebrate evolution and ecosystems in the Mesozoic, the Permian mass extinction, the late Paleozoic glaciation, and the origin of the first trees and land plants in the Devonian-Ordovician. With state-of-the art expert scientific instruction on these topics and up-to-date and scientifically accurate illustrations, this book can serve as an international course for students, teachers, and other interested individuals.

Details the history of Nature on our planet for undergraduate and graduate students, with a focus on terrestrial paleoenvironments

Offers expert research accounts on the major transformations of natural systems during the Cenozoic, Mesozoic, and Paleozoic

Dr. Edoardo Martinetto is an Assistant Professor and Researcher in the Earth Sciences Department at Turin University. He is a member of the Italian Association for the Study of Quaternary, the International Organization of Paleobotany, and the Italian Paleontological Association. He served as an Associate Editor for the Bulletin of the Italian Paleontological Society, and as a reviewer for several Journals including the American Journal of Botany and the Journal of Systematic Paleontolology.

Dr. Emanuel Tschopp is a Postdoctoral Fellow at the American Museum of Natural History. He earned his PhD in Geology from University Nova of Lisbon in 2014, and is a member of several professional societies such as the Society of Vertebrate Paleontology and the European Association of Vertebrate Palaeontologists. He has served several years as Editor-in-Chief for the Journal of Paleontological Techniques, where he is still a member of the editorial board, and is a recommender for PCI Paleo.  Dr. Robert Gastaldo is a Whipple-Coddington Professor of Geology at Colby College. He is a member of several professional societies including the Geological Society of America, the Paleontological Association, and the Society of Economic Paleontologists & Mineralogists, and serves on the Editorial Board for the International Journal of Paleontology and Stratigraphy, and the Journal of Taphonomy, Prometheus Press. He is a Forschungpreisträger of the Alexander von Humbolt Stiftung, Bonn, Germany; a Fulbright Scholar (The Netherlands, South Africa) of the Institute of International Education, United States; and a recipient of the Gilbert H. Cady award from the Geological Society of America, Boulder, Colorado, USA.


Inhalt
Chapter1: The last three millions of unequal spring thaws.- Chapter2: Triumph and fall of the wet, warmer and never-more-diverse temperate forests (Oligocene-Pliocene).- Chapter3: Aridity, cooling, open vegetation and the evolution of plants and animals in the Cenozoic.- Chapter4: Visiting the "PETM" greenhouse: environments, plants and animals of the early Cenozoic.- Chapter5: When and why Nature gained Angiosperms.- Chapter6: Postcards from the Mesozoic: Forest landscapes with giant flowering trees, enigmatic seed ferns, and other naked-seed plants.- Chapter7: Dinosaurs, but not only: Vertebrate evolution in the Mesozoic.- Chapter8: How to Live with Dinosaurs: Ecosystems across the Mesozoic.- Chapter9: Early Mesozoic Nature in and around Tethys.- Chapter10: The End-Permian Mass Extinction: Nature's revolution.- Chapter11: Long-lasting morphologies despite evolution: Ferns (monilophytes) throughout the Phanerozoic.- Chapter12: The non-analog vegetation of the Late Paleozoic IcehouseHothouse and their coal-forming forested environments.- Chapter13: The Coal Farms of the Late Paleozoic.- Chapter14: Diving with trilobites: Life in the Silurian-Devonian seas.- Chapter15: Back to the beginnings: The Silurian-Devonian as a time of major innovation in plants and their communities.

Untertitel
Virtual field trips through the Nature of the past