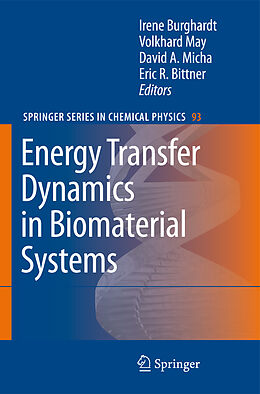 This book contains papers that cover key topics addressed in the workshop Energy Flow Dynamics in Biomaterial Systems, held October 2007. It illustrates the many facets of today's theoretical picture of electronic and vibronic dynamics and transport phenomena.

The role of quantum coherence in promoting the e ciency of the initial stages of photosynthesis is an open and intriguing question. Lee, Cheng, and Fleming, Science 316, 1462 (2007) The understanding and design of functional biomaterials is one of today's grand challenge areas that has sparked an intense exchange between biology, materials sciences, electronics, and various other disciplines. Many new - velopments are underway in organic photovoltaics, molecular electronics, and biomimetic research involving, e. g. , arti cal light-harvesting systems inspired by photosynthesis, along with a host of other concepts and device applications. In fact, materials scientists may well be advised to take advantage of Nature's 3. 8 billion year head-start in designing new materials for light-harvesting and electro-optical applications. Since many of these developments reach into the molecular domain, the - derstanding of nano-structured functional materials equally necessitates f- damental aspects of molecular physics, chemistry, and biology. The elementary energy and charge transfer processes bear much similarity to the molecular phenomena that have been revealed in unprecedented detail by ultrafast op- cal spectroscopies. Indeed, these spectroscopies, which were initially developed and applied for the study of small molecular species, have already evolved into an invaluable tool to monitor ultrafast dynamics in complex biological and materials systems. The molecular-level phenomena in question are often of intrinsically quantum mechanical character, and involve tunneling, non-Born- Oppenheimer e ects, and quantum-mechanical phase coherence.

gives the state-of-the-art of the subject area

This book presents a collection of 14 review articles that cover the key topics addressed in the workshop "Energy Flow Dynamics in Biomaterial Systems" which was held in October 2007 in Paris. These reviews illustrate the many facets of today's theoretical picture of electronic and vibronic dynamics and transport phenomena in biological, biomimetic, and molecular electronic systems. Part I focuses on excitation energy transfer in photosynthetic reaction centers and other multichromophoric systems, part II gives a tour d'horizon of DNA research, and part III addresses molecular electronics and quantum transport in organic materials. Finally, parts IV and V cover recent methodological developments in open system dynamics and hybrid quantum-classical methods. The scope of the book is deliberately broad in terms of physical systems studied and yet unified in the use of quantum dynamical methods to describe transient and often ultrafast energy and charge transfer events in complex systems.