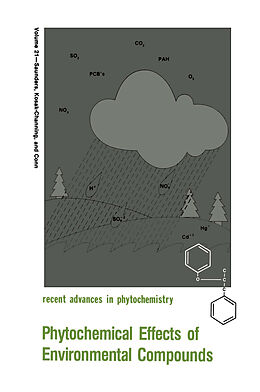 The influence of compounds in the environment on the chemistry of plants is a topic which has economic and scientific implications of global importance. Selected presentations in this symposium covered several topics within this immense field, inclusive of air, soil, and aquatic sources of the compounds. As demonstrated in Chapter 4 by O'Keeffe et al. we have not restricted the discussion solely to negative aspects of anthropogenic compounds. Nor could we begin to cover comprehensively all major classes of environmental compounds in the air, soil or water that may have an effect on the phytochemistry of plants. Our intent was to focus on some of the timely and well publicized environmental constituents such as ozone, sulfur dioxide, acid rain, and others, to provide an authoritative publication specifically related to environ mental modifications of plant chemistry. The concept of this symposium originated with the Executive Committee of the Phytochemical Society of North America in 1983. It was brought to fruition during July 13-17, 1986 on the campus of the University of Maryland at the annual meeting of the PSNA through the efforts of the Symposium Committee composed of James A. Saunders and Lynn Kosak-Channing. Financial support for this meeting was provided by the Phytochemical Society of North America, as well as by generous contributions from E. I. du Pont de Nemours & Company and the U. S. Department of Agriculture. The Organizing Committee, consisting of J. A. Saunders (Chair), J. M. Gillespie, L. Kosak-Channing, E. H. Lee, J. P.

Inhalt
1. Sulfur Dioxide and Chloroplast Metabolism.- 2. The Biochemistry of Ozone Attack on the Plasma Membrane of Plant Cells.- 3. Effects of Ozone and Sulfur Dioxide Stress on Growth and Carbon Allocation in Plants.- 4. Uptake and Metabolism of Phenolic Compounds by the Water Hyacinth (Eichhornia crassipes).- 5. Control of Trace Element Toxicity by Phytoplankton.- 6. Plant and Bacterial Cytochromes P-450: Involvement in Herbicide Metabolism.- 7. PCBs in the Atmosphere and Their Accumulation in Foliage and Crops.- 8. Chemical Interactions of Acidic Precipitation and Terrestrial Vegetation.- 9. Bioavailability of Heavy Metals in Sludge-Amended Soils Ten Years After Treatment.