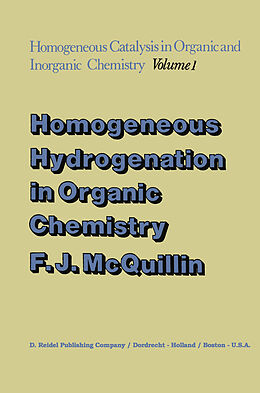 Organic chemistry is constantly concerned with effecting reactions at a particular centre in a complex molecule, and if possible with a high and predictable level of stereoselectivity. In the light of much accumulated ex perience within organic chemistry it is usually possible to assess the likeli hood of alternative reaction pathways at least qualitatively. However, well based expectations can be falsified, and the experiments directed to the synthesis of vitamin B12 which led to Woodward's recognition of orbital symmetry control in organic chemistry are an instructive example. Our limi tations in this respect are very much accentuated in the case of hetero geneous reactions, which present additional problems, and except for very well studied instances, heterogeneous catalysis has remained a relatively empirical area of chemistry. Knowledge in this area has, however, been greatly improved by the development of transition metal complexes which replicate the catalytic properties of the metals, and are effective in a homo geneous reaction system. This development has advanced our understanding of catalysis by making it possible to interpret reactions in strictly molecular terms. In addition, these homogeneously active complexes are frequently more selective than their heterogeneous metallic counterparts either in discriminating between different functional centres in a molecule or in of fering better stereoselectivity. Homogeneous catalysts have now been devised for a number of organic chemical reactions, including hydrogenation, carbonylation, polymerisa tion, and isomerisation and dismutation of alkenes.