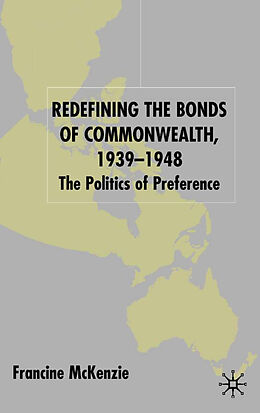 This work is a path-breaking study of the changing attitudes of Canada, Australia, New Zealand and South Africa to Britain and the Commonwealth in the 1940s and the effect of those changes on their individual and collective standing in international affairs. The focus is imperial preference, the largest discriminatory tariff system in the world and a potent symbol of Commonwealth unity. It is based on archival research in Britain, Canada, Australia, New Zealand and the United States.

Autorentext
FRANCINE MCKENZIE is Assistant Professor in the History Department at the University of Western Ontario. She has published articles on the political and economic relations of the Commonwealth.

Inhalt
List of Tables Acknowledgements Abbreviations Introduction: The Necessity of Redefining the Commonwealth A Short History of Imperial Preference: The Myth of Commonwealth Unity and the Reality of National Interests Defining National Trade Policy and National Interests from Mutual Aid to the End of the War The Beginning of Wartime Consultation, 1943 Problems Making Peace: Anglo-American Competition and Commonwealth Jockeying, January 1944-August 1945 Imperial Preference and the Anglo-American Loan Negotiations, September-December 1945 Waiting for the Geneva Conference to Begin: Commonwealth and International Progress Along the Way, January 1946-April 1947 The Geneva Negotiations, 10 April-30 October 1947 The Havana Conference and the Reception of the GATT Agreements Across the Commonwealth The Future of the Commonwealth and Commonwealth History Appendix I: Cast of Characters Endnotes Bibliography Index

Untertitel
The Politics of Preference