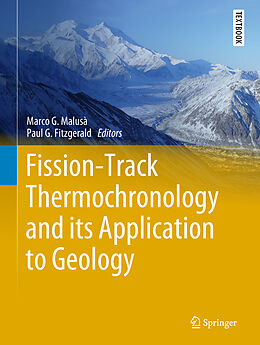 Fission-Track Thermochronology and its Application to Geology

This book is focused on the basics of applying thermochronology to geological and tectonic problems, with the emphasis on fission-track thermochronology. It is conceived for relatively new practitioners to thermochronology, as well as scientists experienced in the various methods. The book is structured in two parts.

Part I is devoted to the fundamentals of the fission-track method, to its integration with other geochronologic methods, and to the basic principles of statistics for fission-track dating and sedimentology applied to detrital thermochronology. Part I also includes the historical development of the technique and thoughts on future directions. Part II is devoted to the geological interpretation of the thermochronologic record. The thermal frame of reference and the different approaches for the interpretation of fission-track data within a geological framework of both basement and detrital studies are discussed in detail. Separate chapters demonstrate the application of fission-track thermochronology from various perspectives (e.g., tectonics, petrology, stratigraphy, hydrocarbon exploration, geomorphology), with other chapters on the application to basement rocks in orogens, passive continental margins and cratonic interiors, as well as various applications of detrital thermochronology.

Provides details on the fundamentals of how the technique is applied, from fieldwork, to statistics, to understanding annealing

Marco G. Malusà is a geologist at the University of Milano-Bicocca whose main research emphasis is the tectonic evolution and exhumation processes of orogenic belts and associated detrital fluxes to sedimentary basins. He obtained his MSc and PhD degrees at the University of Torino, and began his research career contributing to extensive geologic mapping projects in the Western Alps with the National Research Council of Italy. His research integrates bedrock and detrital thermochronology with field geology (sedimentology, stratigraphy, structural geology) and geophysics. Study areas include orogenic belts and sedimentary basins of the Mediterranean and North Africa.

Paul G. Fitzgerald is a Professor of Earth Sciences at Syracuse University in New York. He obtained his BSc and BSc(Hons) degrees at Victoria University of Wellington in New Zealand and his PhD at the University of Melbourne in Australia. He was a post-doctoral researcher at Arizona State University and then a research scientist at the University of Arizona. His research involves the application of low-temperature thermochronology to geologic and tectonic problems, mainly associated with the formation of orogens and understanding geologic processes. He has worked extensively in Antarctica, Alaska, the Basin and Range Province of southwestern United States, Papua New Guinea and the Pyrenees.

Titel
Fission-Track Thermochronology and its Application to Geology