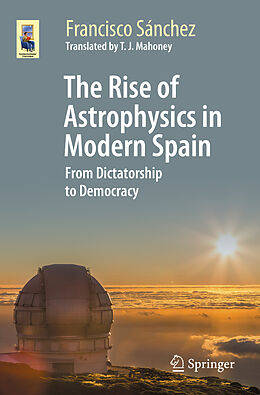 The Rise of Astrophysics in Modern Spain

With foreword by astrophysicist and Queen guitarist Brian May

This book describes the unlikely development of astrophysics in Spain, set against the final decade of Franco's rule and the country's transition to democracy.

The author, Founding Director of Spain's Instituto de Astrofísica de Canarias, gives a firsthand account of his own and others' odyssey in establishing the field in Franco's Spain, showing how in a mere half-century, Spain was able to transform from a scientific backwater to a world player in astronomy and astrophysics. The book is a behind-the-scenes, warts-and-all depiction of how Big Science gets done, showing the motivationssometimes as entertaining as they are infuriatingthat drive scientific institutions and the scientists who work for them.

Many astronomers, both professional and amateur, and historians know of the great scientific work being done in Spain, but there is very little published information available about the complex story underlying it. This English edition now makes that story accessible for the lay reader. With its casual, yet captivating narrative, the book is a rare and inspiring contribution to the history of astrophysics, science policy, education and outreach.

Discusses technology transfer and the economic benefits of science

Professor Francisco Sánchez played a leading role in the introduction of astrophysics to Spain. During the sixties he carried out site testing at Izaña (Tenerife) to confirm the suitability of the site for the establishment of an astronomical observatory. Since then, his goal has always been to promote the Canarian summits as ideal locations for advanced telescopes and to promote the skies above the Canarian observatories as a natural resource to be exploited for scientific research. He founded the Instituto de Astrofísica de Canarias (IAC), which came into existence in 1982 and is now a leading astrophysical research centre. Under Sánchez's direction, a key activity of the IAC was, and still is, technology transfer, its efforts in this direction coming to full fruition with the building of the 10.4 metre Gran Telescopio Canarias and the IAC's participation in major space astrophysical missions. Professor Sánchez retired in 2013 and holds the official title of Founding Director of the IAC.

Terry Mahoney is a scientific editor and translator at the Research Department of the Instituto de Astrofísica de Canarias. He joined the IAC in 1989. From 1993 to 1995 he was an astronomer at GRANTECAN, S.A. on a campaign to choose between two candidate sites for the emplacement of the 10.4 metre GTC at Roque de los Muchachos Observatory. His research interests include the structure of the Galaxy, astronomical terminology and nomenclature, and the life and work of Johannes Kepler. He has been an astronomy adviser to the Oxford English dictionary since 1993 and is Editor-in-Chief of Springer's Compendium of the Astronomical Lexicon, the first instalment of which was published in 2014. He is a member of the IAU, the Spanish Astronomical Society, and the European Astronomical Society.

Titel
The Rise of Astrophysics in Modern Spain

Untertitel
From Dictatorship to Democracy