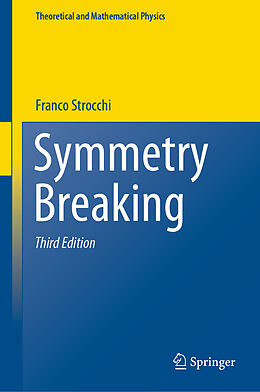 The third edition of the by now classic reference on rigorous analysis of symmetry breaking in both classical and quantum field theories adds new topics of relevance, in particular the effect of dynamical Coulomb delocalization, by which boundary conditions give rise to volume effects and to energy/mass gap in the Goldstone spectrum (plasmon spectrum, Anderson superconductivity, Higgs phenomenon). The book closes with a discussion of the physical meaning of global and local gauge symmetries and their breaking, with attention to the effect of gauge group topology in QCD.

From the reviews of the first edition:

It is remarkable to see how much material can actually be presented in a rigorous way (incidentally, many of the results presented are due to Strocchi himself), yet this is largely ignored, the original heuristic derivations being, as a rule, more popular. - At each step he strongly emphasizes the physical meaning and motivation of the various notions introduced [...] a book that fills a conspicuous gap in the literature, and does it rather well. It could also be a good basis for a graduate course in mathematical physics. J.-P. Antoine, Physicalia 28/2, 2006

Despite many accounts in popular textbooks and a widespread belief, the phenomenon is rather subtle, requires an infinite set of degrees of freedom and an advanced mathematical setting of the system under investigation. [...] The mathematically oriented graduate student will certainly benefit from this thorough, rigorous and detailed investigation. G. Roepstorff, Zentralblatt MATH, Vol. 1075, 2006

From the reviews of the second edition:

This second edition of Strocchi's Symmetry Breaking presents a complete, generalized and highly rigorous discussion of the subject, based on a formal analysis of conditions necessary for the mechanism of spontaneous symmetry breaking to occur in classical systems, as well as in quantum systems. [] This book is specifically recommended for mathematical physicists interested in a deeper and rigorous understanding of the subject, and it should be mandatory for researchers studying the mechanism of spontaneous symmetry breaking. S. Hajjawi, Mathematical Reviews, 2008

Authored by a leading authority in the field

Useful as both an introduction and reference text

Autorentext
Franco Strocchi, after graduating with maximum cum laude at the University of Pisa and at Scuola Normale Superiore in 1961, was lecturer at both Institutions, research associate and visiting professor at Princeton University, visiting Schroedinger professor at Wien University, visiting scientist at CERN theory division, full professor of theoretical physics at the International School of Advanced Studies (SISSA, Trieste) and professor at Scuola Normale Superiore. He gave invited lectures at various meetings and International Schools and he is the author of several books on the subjects of his research works (Elements of Quantum Mechanics of Infinite Systems, World Scientific 1985, Selected Topics on the General Properties of Quantum Field Theory, World Scientific 1993, Symmetry Breaking, Springer 2005, 2008, An Introduction to the Mathematical Structure of Quantum Mechanics, World Scientific 2008, 2010, An Introduction to Non-Perturbative Foundations of Quantum Field Theory, Oxford University Press, International Series of Monographs in Physics, 2013, 2016, Gauge Invariance and Weyl-Polymer Quantization, Springer 2016, A primer of Analytical Mechanics, Springer 2018) and of more than one hundred scientific papers.