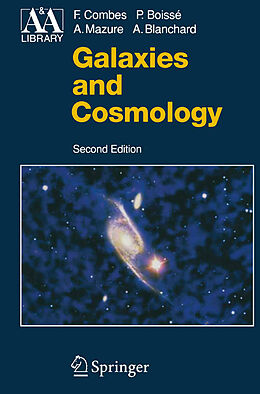 Cosmology is the study of nature on the grandest scale we know: that of the Universe itself. This successful and class-tested textbook covers all the essentials: galaxies, their formation, morphology, dynamics, stellar and gaseous structure, and interactions; radio sources, quasars, and other galactic nuclei and their spectra and absorption-line systems; and the interstellar medium and the Universe on a large scale -- in short, all of extragalactic astronomy. The emphasis throughout is on data acquired at all wavelengths, thanks to modern observational techniques, and on the concepts relevant to each type of object. The authors present the thinking that lies at the heart of the newest theories and developments, including the formation of stars and spiral and barred structures, the origin of absorption lines, the properties of galaxies, and recent inflationary theories in cosmology. Thanks to considerable progress in telescope technology in recent years, galaxies are now observed with an enlarged look-back time, and astronomers have begun recently to trace the history of star formation. These major advances are included in this revised and updated edition, together with further updates in critical areas of galactic astronomy and cosmology.

"This, the second edition of a tried and trusted text, presents the very latest consensus of opinion on the formation, maintenance and evolution of galactic structures and cosmology. I found the style of this text very accessible and easy to read. [...] I could easily imagine the interested non-specialist getting a lot out of this book, owing to the use of mathematics as an ancillary aspect of the text. [...] it will certainly be of use to graduate students beginning their studies in cosmology and galactic astronomy." (Neil English, Astronomy Now, May 2003)

Inhalt
General Introduction.- 1. The Classification and Morphology of Galaxies.- 2. The Galactic Interstellar Medium.- 3. The Kinematics and Masses of Galaxies.- 4. Elliptical Galaxies.- 5. The Spiral Structure of Galaxies.- 6. Barred Galaxies.- 7. Interactions Between Galaxies.- 8. Extragalactic Radio Sources.- 9. Quasars and Other Active Nuclei.- 10. Quasar Absorption-Line Systems.- 11. The Universe on a Large Scale.- 12. The Formation of Galaxies and Large Structures in the Universe.- 13. Cosmology.- List of Constants, Notation, and Units Used.