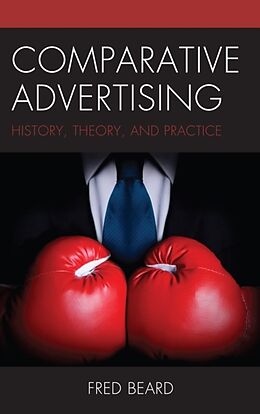 From auto insurance to ready-to-eat soups and satellite TV services, both national and local advertisers in the United States-and increasingly around the world-invest a great deal of time and money on ads and campaigns in which they directly identify their competitors or refer indirectly to "the other guys." Yet business decision-makers and advertising creative professionals have long believed that creating successful comparative advertising can be extraordinarily difficult. Many have discovered that a strategic or tactical misstep can easily lead to a disaster, such as negative responses from consumers, a successful legal challenge from one or more competitors, or the escalation of hostilities into an ongoing and damaging comparative advertising war. Comparative Advertising: History, Theory, and Practice offers scholars interested in why many business decision-makers believe they can win our loyalty by running down a competitor-as well as anyone who plans, creates, or pays for advertising-a thorough and timely synthesis of the vast body of historical research, theory, and professional insights devoted to one of advertising's most frequently debated message tactics. The overall goal of this book is to discover answers to a simple question: Why do so many advertisers often rely on a message tactic that research and professional experience confirms they frequently regret using?

Zusammenfassung
Comparative advertisements-the kind that refer to "the other guys" or actually identify competitors by name-can be tremendously successful, or lead to a marketing disaster. The History, Theory, and Practice of Comparative Advertising reveals the possibilities and pitfalls associated with this widely used approach.