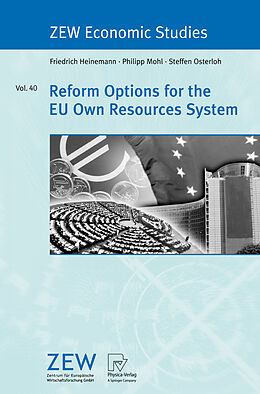 Reform Options for the EU Own Resources System

The general review of the European Union's budget scheduled for the years 2008 and 2009 offers a unique opportunity for reflections. Explicitly this review is without taboos so that also substantive changes can and should be debated. Without doubt much better budgetary systems can be imagined compared to the status quo of the EU budget which is the outcome of a path-dependent process and where many details are only understandable by taking account of the historical context of past decisions. However, even if much better systems could be designed in theory, each reform suggestion, in the end, must pass the reality check of fi- ing unanimous support from all 27 member countries. This restriction heavily l- its the universe of available reform options. Faced with that difficulty the ZEW project team embarked on the adventure to think about possible reform options for the future EU own resource system. This volume documents the conclusions. At first sight our reform suggestion may - pear to be of a rather piecemeal nature since we recommend a reform model with strong ties to the status quo. Nevertheless, we are convinced that our seemingly minor changes will set the budget on a path towards a more rational European budget which, in the end, will create leeway for financing European policies with a true European value added. We gratefully acknowledge financial support from the German Federal Min- try of Finance in conducting this study.

This study develops a reform proposal for the future revenue system of the EU budget. The findings strongly reject the idea that a reform based on an EU tax-based own resource would remedy current problems.

Against the background of the status quo analysis the authors present a reform model which includes the complete phasing out of the VAT resource, a financing of the budget completely on the basis of the GNI resource and a generalised but limited correction mechanism (GLCM). The GLCM would make a clear distinction between policies having an intentional distributive effect or not. A further element of the reform proposal is a move towards a stronger financial contribution of regions to EU spending.

Titel
Reform Options for the EU Own Resources System