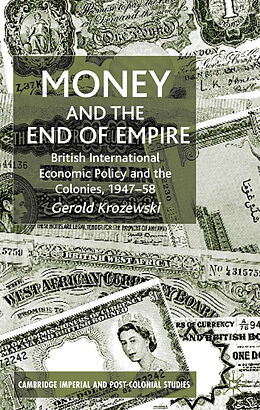 Money and the End of Empire

This book presents a penetrating new analysis of the end of the empire, located at the intersection of politics, economy and society in Britain and the colonies. In the late 1940s and early 1950s, when political control was feasible, discriminatory management of the colonies sustained Britain's postwar recovery. But synergy turned into conflict as Britain moved towards economic liberalization and financial cosmopolitanism, and found it increasingly difficult to reconcile established relations with emerging priorities. Based on a wide range of archival and other sources, this study relates political and economic developments in Britain and the colonies in original ways to overcome the gulf between peripheralist and Euro-centric explanations of postwar British imperial relations, and helps redress the neglect of the empire in modern international history. Money and the End of Empire will nourish debates in British and international economic and political history and is essential reading for historians of Britain and the empire.

Autorentext
GEROLD KROZEWSKI is Lecturer in History at the Graduate Institute of International Studies in Geneva.

Titel
Money and the End of Empire