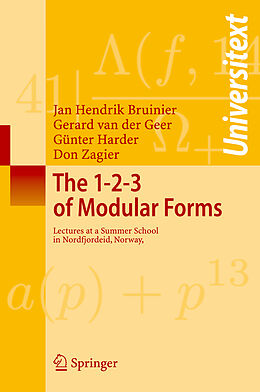 This book grew out of three series of lectures on "Modular Forms and their Applications". Each part treats a number of beautiful applications, and together they form a comprehensive survey for the novice and a useful reference for a broad group of mathematicians.

This book grew out of three series of lectures given at the summer school on "Modular Forms and their Applications" at the Sophus Lie Conference Center in Nordfjordeid in June 2004. The first series treats the classical one-variable theory of elliptic modular forms. The second series presents the theory of Hilbert modular forms in two variables and Hilbert modular surfaces. The third series gives an introduction to Siegel modular forms and discusses a conjecture by Harder. It also contains Harder's original manuscript with the conjecture.

Each part treats a number of beautiful applications.

"The authors of The 1-2-3 of Modular Forms succeed in providing a thorough account of the theory of modular forms in various guises and applications, discussing in more detail the topics mentioned here as well as many more. Undoubtedly, due to both its breadth and readability, this book will be a useful source for mathematicians, both novice and expert, wishing to read more about modular forms and a beautiful theory." (Amanda Folsom, Bulletin of the American Mathematical Society, Vol. 46 (3), July, 2009)

If you ever wanted to gain a general understanding of modular forms then you should check out The 1-2-3 of Modular Forms. Each set of lectures includes standard introductory material as well as concrete examples and applications. One could use this as a way to start a graduate student working on modular forms . Whether you are looking for a nice way to begin your study or are already familiar with them, this is a book that you will enjoy. (Suzanne Caulk, The Mathematical Association of America, September, 2010)

Untertitel
Lectures at a Summer School in Nordfjordeid, Norway, August 2004