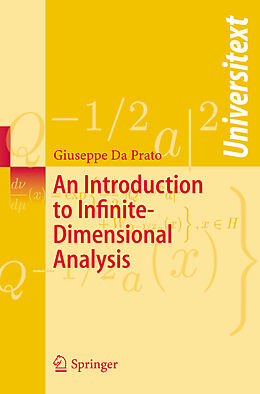 An Introduction to Infinite-Dimensional Analysis

In this revised and extended version of his course notes from a 1-year course at Scuola Normale Superiore, Pisa, the author provides an introduction for an audience knowing basic functional analysis and measure theory but not necessarily probability theory to analysis in a separable Hilbert space of infinite dimension.

Starting from the definition of Gaussian measures in Hilbert spaces, concepts such as the Cameron-Martin formula, Brownian motion and Wiener integral are introduced in a simple way. These concepts are then used to illustrate some basic stochastic dynamical systems (including dissipative nonlinearities) and Markov semi-groups, paying special attention to their long-time behavior: ergodicity, invariant measure. Here fundamental results like the theorems of Prokhorov, Von Neumann, Krylov-Bogoliubov and Khas'minski are proved. The last chapter is devoted to gradient systems and their asymptotic behavior.

Based on well-known lectures given at SNS Pisa

The author is a world leader in the field of infinite dimensional analysis, and the teacher of many other leaders. Has published very little in book for thus far

GIUSEPPE DA PRATO was born in La Spezia in 1936. Having graduated in Physics in 1960 from the University of Rome, he became full professor of Mathematics in 1968 and taught in Rome and in Trento. Since 1979 he has been Professor of Mathematical Analysis at the Scuola Normale Superiore di Pisa.

Giuseppe Da Prato is the author of 5 other books, some co-authored with other international specialists, on control theory, stochastic differential equations and infinite dimensional Kolmogorov equations, and of more than 250 papers in international scientific journals.

Titel
An Introduction to Infinite-Dimensional Analysis