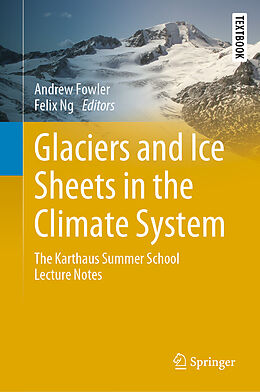 Glaciers and Ice Sheets in the Climate System

Our realisation of how profoundly glaciers and ice sheets respond to climate change and impact sea level and the environment has propelled their study to the forefront of Earth system science. Aspects of this multidisciplinary endeavour now constitute major areas of research. This book is named after the international summer school held annually in the beautiful alpine village of Karthaus, Northern Italy, and consists of twenty chapters based on lectures from the school. They cover theory, methods, and observations, and introduce readers to essential glaciological topics such as ice-flow dynamics, polar meteorology, mass balance, ice-core analysis, paleoclimatology, remote sensing and geophysical methods, glacial isostatic adjustment, modern and past glacial fluctuations, and ice sheet reconstruction. The chapters were written by thirty-four contributing authors who are leading international authorities in their fields. The book can be used as a graduate-level textbook for a university course, and as a valuable reference guide for practising glaciologists and climate scientists.

Titel
Glaciers and Ice Sheets in the Climate System