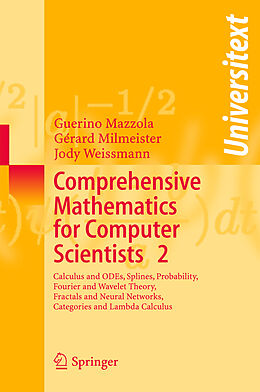 This second volume of a comprehensive tour through mathematical core subjects for computer scientists completes the ?rst volume in two - gards: Part III ?rst adds topology, di?erential, and integral calculus to the t- ics of sets, graphs, algebra, formal logic, machines, and linear geometry, of volume 1. With this spectrum of fundamentals in mathematical e- cation, young professionals should be able to successfully attack more involved subjects, which may be relevant to the computational sciences. In a second regard, the end of part III and part IV add a selection of more advanced topics. In view of the overwhelming variety of mathematical approaches in the computational sciences, any selection, even the most empirical, requires a methodological justi?cation. Our primary criterion has been the search for harmonization and optimization of thematic - versity and logical coherence. This is why we have, for instance, bundled such seemingly distant subjects as recursive constructions, ordinary d- ferential equations, and fractals under the unifying perspective of c- traction theory.

"This book is the second volume of . each chapter summarizes rich and flourishing theories . The authors are honest, and provide extensive references for the interested reader. will find several exercises as well. My overall opinion of this book is very positive. It provides a good and well-founded starting point for the study of several different areas of mathematics. I recommend it for students and scientists, especially in computer science ." (A. Pethö, Computing Reviews, April, 2005)

"This two-volume textbook Comprehensive Mathematics for Computer Scientists is a self-contained comprehensive presentation of mathematics . The concept framework is streamlined but defining and proving virtually everything. The style implicitly follows the spirit of recent topos-oriented theoretical computer science. The numerous course examples are motivated by computer science and bear a generic scientific meaning." (Zentralblatt für Didaktik der Mathematik, August, 2005)

"The second volume of this comprehensive tour through mathematical subjects for computer scientists deals with topology, differential- and integral-calculus in one and several variables, and ordinary differential equations. if she (he) masters these the result will be an excellent computer scientist. With the aim to achieve this it would be quite motivating for the reader to see more concrete applications of the abstract mathematical theory." (H. Mitsch, Monatshefte für Mathematik, Vol. 147 (2), 2006)

"This is the second volume of a self-contained comprehensive presentation of mathematics for the working computer scientists. The presentation of the book uses in an appropriate way the unifying language of category theory. This gives a new and more elegant view of the content . The text is complemented by a large number of examples, illustrations, and applications and ends with the guide for future reading on the different topics." (Yves Félix, Bulletin of the Belgian Mathematical Society, Vol. 12 (2), 2005)