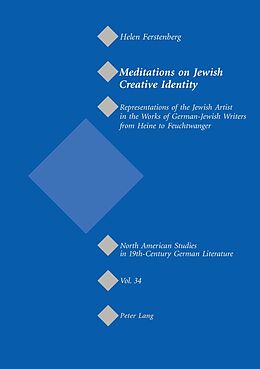 Through an analysis of representations of Jewish artists in the works of German-Jewish writers, this book reveals that the issue of a Jewish creative identity was one of the most explosive aspects of a dual German-Jewish identity. In the shadow of both a widespread anti-Semitic stereotype which denied creativity to Jews and also of increasingly contentious debates in Jewish circles on the proper role of Jewish artists within German culture, German-Jewish writers who portrayed Jewish artists in their works were forced to grapple with some of the most contentious questions of their day: the relative importance of German and Jewish allegiance; the issue of Jewish distinctiveness or its opposite expressed in style, language, and theme; and the viability of a "Jewish" participation in German culture. Existing studies sometimes posit Jewish self-hatred or blind attachment to German culture and Enlightenment ideals as characteristic of a broad spectrum of German-Jewish writers. In contrast, this book demonstrates how many German-Jewish writers possessed a profound awareness of cultural conditions and a conscientious desire to integrate the complex demands of a dual identity.

Autorentext
The Author: Helen Ferstenberg did her undergraduate studies in French and German at Lancaster University and earned a masters degree in International Affairs from Columbia University. Subsequently she studied and taught at Yale University where she received her Ph.D. in German Literature in 2002.