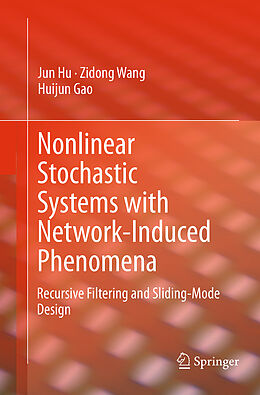 The text is self-contained, beginning with an introduction to nonlinear stochastic systems, network-induced phenomena and filtering and control, moving through a collection of the latest research results which focuses on the three aspects of:

· the state-of-the-art of nonlinear filtering and control;

· recent advances in recursive filtering and sliding mode control; and

· their potential for application in networked control systems, and concluding with some ideas for future research work. New concepts such as the randomly occurring uncertainty and the probability-constrained performance index are proposed to make the network models as realistic as possible. The power of combinations of such recent tools as the completing-the-square and sums-of-squares techniques, Hamilton-Jacobi-Isaacs matrix inequalities, difference linear matrix inequalities and parameter-dependent matrix inequalities is exploited in treating the mathematical and computational challenges arising from nonlinearity and stochasticity.

Nonlinear Stochastic Systems with Network-Induced Phenomena establishes a unified framework of control and filtering which will be of value to academic researchers in bringing structure to problems associated with an important class of networked system and offering new means of solving them. The significance of the new concepts, models and methods presented for practical control engineering and signal processing will also make it a valuable reference for engineers dealing with nonlinear control and filtering problems.

Zidong Wang is currently Professor of Dynamical Systems and Computing at Brunel University, West London, United Kingdom. From January 1997 to December 1998, he was an Alexander von Humboldt research fellow with the Control Engineering Laboratory, Ruhr-University Bochum, Germany. From January 1999 to February 2001, he was a Lecturer with the Department of Mathematics, University of Kaiserslautern, Germany. From March 2001 to July 2002, he was a University Senior Research Fellow with the School of Mathematical and Information Sciences, Coventry University, U.K. In August 2002, he joined the Department of Information Systems and Computing, Brunel University, U.K., as a Lecturer, and was then promoted to a Reader in September 2003 and to a Chair Professor in July 2007.

Professor Wang's research interests include dynamical systems, signal processing, bioinformatics, control theory and applications. He has published more than 200 papers in refereed international journals. His publications have received more than 5000 citations (excluding self-citations) with h-index 48. He was awarded the Humboldt research fellowship in 1996 from Alexander von Humboldt Foundation, the JSPS Research Fellowship in 1998 from Japan Society for the Promotion of Science, and the William Mong Visiting Research Fellowship in 2002 from the University of Hong Kong. Professor Wang serves as an Associate Editor for IEEE Transactions on Automatic Control, IEEE Transactions on Neural Networks, IEEE Transactions on Signal Processing, IEEE Transactions on Systems, Man, and Cybernetics Part C, IEEE Transactions on Control Systems Technology, Circuits, Systems & Signal Processing, Asian Journal of Control, an Action Editor for Neural Networks, an Editorial Board Member for International Journal of Systems Science, Neurocomputing, International Journal of Computer Mathematics, International Journal of General Systems, and an Associate Editor on the Conference Editorial Board for the IEEE Control Systems Society. He is a Senior Member of the IEEE, a Fellow of the Royal Statistical Society, a member of the program committee for many international conferences, and a very active reviewer for many international journals. He was nominated an appreciated reviewer for IEEE Transactions on Signal Processing in 2006 2008 and 2011, an appreciated reviewer for IEEE Transactions on Intelligent Transportation Systems in 2008; an outstanding reviewer for IEEE Transactions on Automatic Control in 2004 and for the journal Automatica in 2000. Professor Huijun Gao received the Ph.D. degree in control science and engineering from Harbin Institute of Technology, China, in 2005. From November 2003 to August 2004, He was a Research Associate with the Department of Mechanical Engineering, The University of Hong Kong, Hong Kong. From October 2005 to September 2007, he was an Alberta Ingenuity Fellow with the Department of Electrical and Computer Engineering, University of Alberta, Canada. Since November 2004, he has been with Harbin Institute of Technology, where he is currently a Professor and director of the Research Institute of Intelligent Control and Systems. Since January 2009 he has been an Honorary Professor with the Department of Mechanical Engineering, The University of Hong Kong, Hong Kong.

Professor Gao's research interests include network-based control, robust control and filter theory, time-delay systems and their engineering applications. He has published more than 150 SCI-indexed papers in peer-reviewed international journals, and his publications have received more than 4000 citations with H-index 40 (web of science) and 10000 citations with H-index 56 (google scholar). He has received several academic and teaching awards, including the National Outstanding Doctoral Thesis Award in 2007 from the Ministry of Education of China, the National Natural Science Award of China in 2008, the Outstanding Teacher Award of Heilongjiang in 2009 from the Education Department of Heilongjiang Province, the Tan Kah Kee Young Scientist Award in 2012 from the Tan Kah Kee Young Science Foundation, the Distinguished Professor of Yangtze River Scholar in 2013 from Ministry of Education of China, and the IEEE IES David Irwin Early Career Award in 2013 from the IEEE Industrial Electronics Society. He was a recipient of the Alberta Ingenuity Fellowship, the University of Alberta Dorothy J. Killam Memorial Postdoctoral Fellow Prize, and Honorary Izaak Walton Killam Memorial Postdoctoral Fellowship in 2005 from the University of Alberta, and a recipient of the National Outstanding Youth Science Fund in 2008.