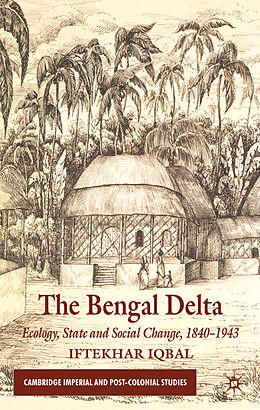 With a focus on colonial Bengal, this book demonstrates how the dynamics of agrarian prosperity or decline, communal conflicts, poverty and famine can only be properly understood from an ecological perspective as well as discussions of state's coercion and popular resistance, market forces and dependency, or contested cultures and consciousness.

'The book's...special contribution is to emphasize the enviornment...that too is obviously a subject worth investigating.' - Reviews in History

Autorentext
IFTEKHAR IQBAL is Assistant Professor in History at the University of Dhaka, Bangladesh. He has degrees in history from Dhaka and Cambridge Universities. His research focuses on the environmental history of modern South Asia, especially in Bengal, and its relationship to both local and global political, economic and social forces.

This book demonstrates how the dynamics of agrarian prosperity or decline, communal conflicts, poverty and famine could be understood more satisfactorily from an environmental perspective as well as discussions of states coercion and popular resistance, market forces and dependency, or contested cultures and consciousness.

Inhalt
Tables, Maps and Illustrations Preface and Acknowledgements Abbreviations Glossary Introduction Ecology and Agrarian Relations in the Nineteenth Century Economy and Society: The Myth and Reality of 'Sonar Bangla' Political Ecology of the Peasant: The Faraizi Movement Between Revolution and Passive Resistance Return of the Bhadralok: Agrarian Environment and the Nation The Railways and the Water Regime Fighting With a Weed: Water Hyacinth, the State and the Public Square Between Food Availability Decline and Entitlement Exchange: An Ecological Prehistory of the Great Bengal Famine of 1943 Reflections Notes Appendixes Bibliography Index