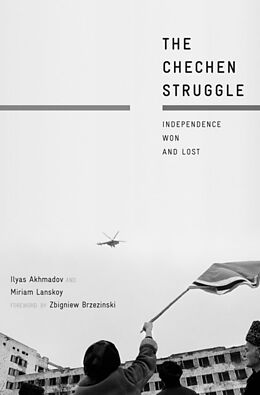 Told from the perspective of its former Foreign minister, this is a uniquely candid account of Chechnya's struggle for independence and its two wars against Russia which will revise our understanding of the conflict and explain how it continues. Features new insights, intimate portraits of key personalities and a foreword by Zbigniew Brzezinski.

"Akhmadov feels disgusted by both Ramzan Kadyrov's rule and the jihadists who hijacked the independence movement. He nurses a vision of the Chechen people one day resurrecting the idea that animated their initial revolt in 1994: the establishment of Chechnya as a secular, democratic state." - The Wall Street Journal

"Akhmadov does not avoid . . .pointing out how (Chechens) contributed to their own national catastrophe. But he saves much of his bitterness for the west. The desires of the Chechens were meaningless when compared to our own security needs. Akhmadov forcefully argues that, in ignoring the legitimate desires of ordinary people, the democracies undermine the very safety they think they are securing...when historians write about the war on terror, Akhmadov will come out of it a lot better than a lot of western politicians will." - The Guardian

"A personal and a historical account of the Chechen struggle . . ..informative and highly readable . . .Recommended." - Choice

"Ilyas Akhmadov's memoir is the first personal account by a member of the Chechen leadership of the events that led to the deaths of hundreds of thousands of Chechens and the transformation of Russia. He gives the best description I have seen of the fateful 1999 invasion of Dagestan that led to the Second Chechen War and he provides objective and fair minded portraits of the two most important Chechen leaders, Aslan Maskhadov and Shamil Basayev. He also shows the roots of the divisions in Chechen society and explains the background to the kidnapping for ransom that did so much to damage the reputation of the Chechens. His book needs to be read." - David Satter, Darkness at Dawn: the Rise of the Russian Criminal State

"The publication of The Chechen Struggle is an event of singular importance. As Chechnya s former Foreign Minister, Akhmadov ably shows that there was always a moderate alternative to Chechen extremism - and that Russia has systematically destroyed it. This is Akhmadov s urgent message, and as the Chechen conflict spreads to the other republics of the North Caucasus, further emboldening Russia s autocrats, it is one the world can no longer afford to ignore." - Carl Gershman, President of the National Endowment for Democracy

Autorentext
ILYAS AKHMADOV was the Foreign Minister of Chechnya during the second war with Russia where he represented the legitimately elected government of Aslan Maskhadov. He authored a peace plan, launched a negotiations process, and sought to bring attention to the tragic fate of his nation through a variety of international forums. His work has appeared in The Washington Post and in The Boston Globe.

MIRIAM LANSKOY works at the National Endowment for Democracy on programs in Eurasia.