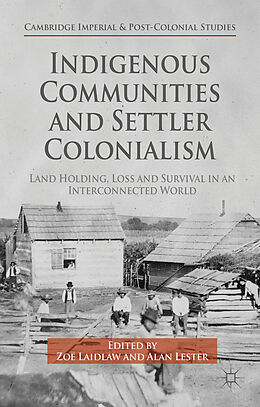 The new world created through Anglophone emigration in the 19th century has been much studied. But there have been few accounts of what this meant for the Indigenous populations. This book shows that Indigenous communities tenaciously held land in the midst of dispossession, whilst becoming interconnected through their struggles to do so.

Inhalt
1. Indigenous Sites and Mobilities: Connected Struggles in the Long Nineteenth Century; Alan Lester and Zoë Laidlaw 2. Re-imagining Settler Sovereignty: The Call to Law at the Coranderrk Aboriginal Reserve, Victoria 1881 (and Beyond); Julie Evans and Giordano Nanni 3. Indigenous Land Loss, Justice and Race: Anne Bon and the Contradictions of Settler Humanitarianism; Joanna Cruickshank and Patricia Grimshaw 4. 'On my ground': Indigenous Farmers at New Norcia 1860s-1900; Tiffany Shellam 5. The Possession and Dispossession of the Kat River Settlement; Robert Ross 6. Discourses of Land Use, Land Access, and Land Rights at Farmerfield and Loeriesfontein in Nineteenth Century South Africa; Fiona Vernal 7. Living on the Rivers' Edge at the Taieri Native Reserve; Angela Wanhalla 8. Designing Dispossession: The Select Committee on the Hudsons' Bay Company, Fur-Trade Governance, Indigenous Peoples, and Settler Possibility; Adele Perry 9. 'They Would Not Give Up One Inch of It': The Rise and Demise of St Peter's Reserve, Manitoba; Sarah Carter 10. Site of Dispossession, Site of Persistence: The Haudenosaunee (Six Nations) at the Grand River Territory in the Nineteenth and Twentieth Centuries; Cecilia Morgan 11. Potawatomi Allotment in Kansas; Kelli Mosteller 12. Law, Identity and Dispossession - The Half-Caste Act of 1886 and Contemporary Legal Definitions of Indigeneity in Australia; Mark McMillan and Cosima McRae

Untertitel
Land Holding, Loss and Survival in an Interconnected World