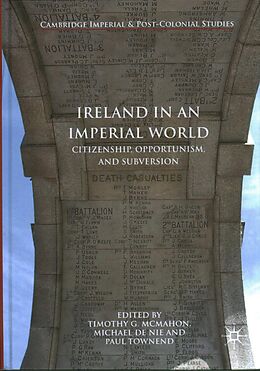 Ireland in an Imperial World

Ireland in an Imperial World interrogates the myriad ways through which Irish men and women experienced, participated in, and challenged empires in the nineteenth and twentieth centuries. Most importantly, they were integral players simultaneously managing and undermining the British Empire, and through their diasporic communities, they built sophisticated arguments that aided challenges to other imperial projects. In emphasizing the interconnections between Ireland and the wider British and Irish worlds, this book argues that a greater appreciation of empire is essential for enriching our understanding of the development of Irish society at home. Moreover, these thirteen essays argue plainly that Ireland was on the cutting edge of broader global developments, both in configuring and dismantling Europe's overseas empires.

Autorentext
Timothy G. McMahon is Associate Professor of History at Marquette University in Milwaukee, USA. A social historian of modern Ireland and the British Empire, McMahon is the author of Grand Opportunity: The Gaelic Revival and Irish Society, 1893-1910 (2008) and Vice President of the American Conference for Irish Studies.
Michael de Nie is Professor of History at the University of West Georgia, USA. He is author of The Eternal Paddy: Irish Identity and the British Press, 1798-1882 (2004), and co-editor (with Karen Steele and Sean Farrell, respectively) of Ireland and the New Journalism (2014) and Power and Popular Culture in Modern Ireland: Essays in Honor of James S. Donnelly, Jr. (2010).
Paul A. Townend is History Department Chair at University of North Carolina Wilmington, USA.  His first book, Father Mathew, Temperance and Irish Identity, won the American Conference on Irish Studies James Donnelly award in 2003. He has published articles in the New Hibernia Review, Catholic Historical Review, Eire/Ireland, and Past and Present and his new book, Anti-Imperialism and the Irish National Movement, is forthcoming.

Zusammenfassung
Ireland in an Imperial World interrogates the myriad ways through which Irish men and women experienced, participated in, and challenged empires in the nineteenth and twentieth centuries.

Inhalt
1 Introduction by Timothy G. McMahon, Michael de Nie and Paul Townend.- Citizenship.- 2 Country Houses and the Distinctiveness of the Irish Imperial Experience by Stephanie Barczewski.- 3 Those the Empire Washed Ashore: Uncovering Ireland's Multi-racial Past by Mark Doyle.-4 Irish Rebel, Imperial Reformer: Charles Gavan Duffy and Australian Federation by Sean Farrell.- 5 The Assassination and Apotheosis of the Earl of Mayo by Timothy G. McMahon.- 6 Imperial Politics and the London Irish by Jennifer Regan-Lefebvre.- Opportunism.- 7 The Irish Press and Imperial Soldiering, 1882-1885 by Michael de Nie.- 8 'The Leader of the Virgin Choirs of Erin': St. Brigid's Missionary College, 1883-1914' by Colin Barr and Rose Luminiello.- 9 'Paddy Does Not Mind Who the Enemy Is': The Royal Irish Constabulary and Colonial Policing by Michael Silvestri.- Subversion.- 10 The 'Piniana' Question: Irish Fenians and the New Zealand Wars by Jill C. Bender.- 11 A Cosmopolitan Nationalist: James J. O'Kelly in America by Paul Townend.- 12 'Up with the American Flag in the All the Glory of Its Stainless Honour': Anti-Imperial Rhetoric in the Chicago Citizen, 1898-1902 by Úna Ní Bhroiméil.- 13 The Shadow Metropole: The Varieties of Anti-Colonialism in Ireland, 1937-1968 by Kenneth L. Shonk, Jr..- Afterword by Stephen Howe

Titel
Ireland in an Imperial World