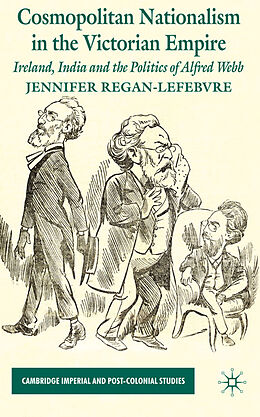 Cosmopolitan Nationalism in the Victorian Empire

The first biography of Alfred Webb, Irish nationalist and president of the 1894 Indian National Congress. The biography explores how Webb viewed nationalism as a vehicle for global social justice. Drawing on archives in Britain, Ireland and India the author reveals how Irish and Indians used cosmopolitan London to create networks across the Empire.

'A fascinating account of an important, though hitherto neglected figure in Irish political life. Scholarly and lucidly written, it spans the range of Webb's activities and influences as a humanitarian reformer, activist and man of letters, both in Ireland and internationally, and provides a thoughtful interpretation of his personality. It is an invaluable contribution to our understanding of the period.'

'This critical biography adds to the broader understanding of the global reach of Irish nationalist thinking in the pre-1916 period...' - History Ireland

'The academic community is deeply in debt to Jennifer Regan-Lefebvre for this well-researched and nuanced study.

Webb's career 'reveals the fabric of multicultural social relations in late nineteenth-century Britain, in which individuals from the periphery of the British Empire met at the imperial core and found an international context to their nationalism'. Regan-Lefebvre has produced an important contribution to the study of Victorian Irish and Imperial radicalism. ' - Eugenio F. Biagini, English Historical Review

'An immensely readable and valuable addition to Irish, imperial and Victorian historiography. Regan-Lefebvre's findings are fresh and unexpected. Her account of Webb's Indian National Congress presidency, although clearly the high point of his life and this book, is honest in its anti-climactic portrayal. Cosmopolitan Nationalism in the Victorian Empire, although presented as biography of a peripheral Irish political figure, delivers much more than it promises: a room with a cosmopolitan view.' - Kate O'Malley, The Journal of Imperial and Commonwealth History

Inhalt
Preface Abbreviations and Terminology 'How rich my life has been, not in itself but in its associations': An Introduction to Alfred Webb 'Interested in people of all countries, especially of America': A Quaker Family in the Atlantic World 'The labours and responsibilities nearly killed me': Social Activism in Victorian Dublin 'Some curious characters floated on the surface': Webb's Entry into Nationalist Politics 'I am willing to take any dangerous part': Webb in the World of Parnell and Gladstone 'A union of hearts firmly based on love of Ireland': Cosmopolitan Friendship in the Imperial Metropolis 'I stand beside you as a comrade': Irish and Indian Political Collaboration 'Politics is a difficult and anxious game': An Assessment of Webb Bibliography

Untertitel
Ireland, India and the Politics of Alfred Webb