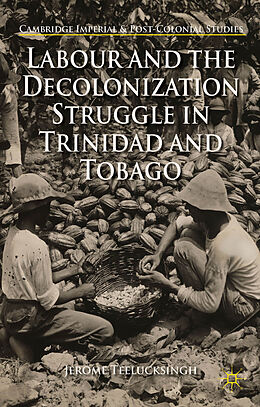 Labour and the Decolonization Struggle in Trinidad and Tobago

This book provides evidence that Labour in Trinidad and Tobago played a vital role in undermining British colonialism and advocating for federation and self-government. Furthermore, there is emphasis on the pioneering efforts of the Labour movement in party politics, social justice, and working class solidarity.

This book begins in the late nineteenth century and traces the organized labor movement in Trinidad and Tobago up until the postwar era and the origins of the shortlived British West Indian Federation. Teelucksingh does raise promising questions and evidence that should create avenues for future analysis, documentation, and study. this would be a place to develop broader arguments and connect his story to a longer historiography of labor mobilization and activism within the Caribbean. (Jana Lipman, Labor Studies in Working-Class History of the Americas, Vol. 13 (3-4), 2016)

Jerome Teelucksingh is a Lecturer at the University of the West Indies in Trinidad and Tobago. His academic publications include Caribbean-Flavoured Presbyterianism, Caribbean Liberators and Caribbean Empire.

Inhalt
Introduction: Labour in the Nineteenth Century 1. The Pioneers: Organised Labour 1894-1920 2. Early Years: The Trinidad Workingmen's Association 3. Involvement of Labour in Politics 1925-1938 4. Labour's voices in the Legislative Council 1925-1938 5. Rise of the Trinidad Labour Party 6. Demands for Self-Government and Federation Conclusion

Titel
Labour and the Decolonization Struggle in Trinidad and Tobago